Scutchamer Knob, also known as Cuckhamsley Hill and occasionally as Scotsman's Knob or Beacon Hill, is an early Iron Age round barrow on the Ridgeway National Trail at East Hendred Down in the English county of Oxfordshire (formerly in Berkshire).

Originally called Cwichelmeshlaew or Cwichelm's Barrow, it is recorded as having been the place where King Edwin of Northumbria killed Cwichelm of Wessex in AD 636 and, in the Middle Ages, became the meeting point of the shire moot (or market) which was abolished in 1620. It was long thought to be the actual burial place of Cwichelm but the mound has been excavated several times without serious finds. In 1006, the Anglo-Saxon Chronicle states that the Danes marched to Cuckhamsley Hill as they believed that if they reached the Hill, they would never return to the sea.

The knob appears to have once been a round barrow, but now is a semi-circular bank with a round front. Its appearance may have changed in part due to vandalism based on the belief it was used to hoard treasure.

The name "Scutchamer" may have derived from "Cwichelmeshlaew". An alternate explanation is that the name is based on the word "scutcher", someone who "scutched" or beat out flax to loosen its fibres, and the knob was a location of local fairs trading in local products deriving from this practice. 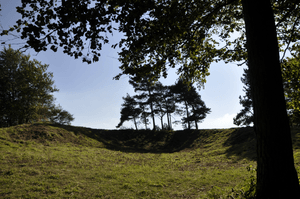 All content from Kiddle encyclopedia articles (including the article images and facts) can be freely used under Attribution-ShareAlike license, unless stated otherwise. Cite this article:
Scutchamer Knob Facts for Kids. Kiddle Encyclopedia.