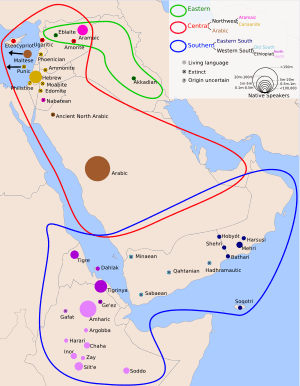 The Semites are a group of people that live in the Middle East, North Africa, and the Horn of Africa. They include Jews, Arabs, and other ethnic groups.

We only know about their origin from the history of the semitic languages. The earliest proved history of any Semitic people is from 30th century BC Mesopotamia. The East Semitic Akkadian-speaking peoples of the Kish civilization, entered the region which had been dominated by the non-Semitic Sumerians.

All content from Kiddle encyclopedia articles (including the article images and facts) can be freely used under Attribution-ShareAlike license, unless stated otherwise. Cite this article:
Semites Facts for Kids. Kiddle Encyclopedia.