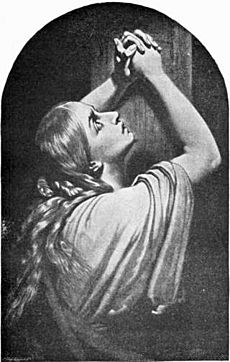 Mary Magdalene, after a painting by Ary Scheffer: the movement now may seem theatrical and sentimental.

Sentimentality is both a literary device used to make people respond emotionally, but usually in a way more than is needed.

"A sentimentalist", Oscar Wilde wrote, "is one who desires (wants) to have the luxury of an emotion without paying for it." Yeats wrote, "Rhetoric is fooling others. Sentimentality is fooling yourself."

Sentimental began to be thought of more negatively from the nineteenth century. Before that it had simply meant "feeling", but it began be criticized for its "excessiveness" (too much), and now is about feeling in situations where it is not needed.

All content from Kiddle encyclopedia articles (including the article images and facts) can be freely used under Attribution-ShareAlike license, unless stated otherwise. Cite this article:
Sentimentality Facts for Kids. Kiddle Encyclopedia.