The seven-arm octopus (Haliphron atlanticus), also known as the septopus or the heptopus, is claimed to be the largest octopus. The claim is based on a partial specimen, and the estimation is of a 4 metre length and a weight of 75 kg. The North Pacific giant octopus is its rival in size.

In 2002, a single specimen of giant proportions was caught by fisheries trawling off the eastern Chatham Rise, New Zealand. This specimen, the largest of this species and of all octopuses, was the first validated record of Haliphron from the South Pacific. It had a mantle length of 0.69 m, total length of 2.90 m, and weight of 61.0 kg, although it was incomplete. 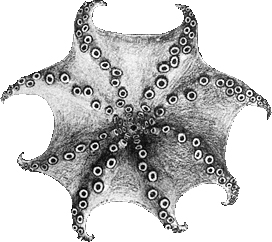 A view of the underside

The seven-arm octopus gets its name because the male's hectocotylus (a specially modified arm used in egg fertilization) is coiled in a sac beneath the right eye.

All content from Kiddle encyclopedia articles (including the article images and facts) can be freely used under Attribution-ShareAlike license, unless stated otherwise. Cite this article:
Seven-arm octopus Facts for Kids. Kiddle Encyclopedia.