Shakespeare's Pizza, founded in 1973, is a Columbia, Missouri landmark known for its popular pizza and unconventional decor. Its original location is at the intersection of 9th and Elm in downtown Columbia, across the street from the campus of the University of Missouri. In November 2010, Shakespeare's was the winner of “Best Bites Challenge: College Edition” on ABC's “Good Morning America.”

Shakespeare's Pizza has three locations in Columbia, Missouri. The original restaurant was located at 9th and Elm. It has since reopened in a new building at the same location. Much of the decor and some of the old building materials were re-used in the new building. The second location opened in 2004 and is often referred to as Shakespeare's West and is located at the corner of West Broadway and Broadfield Drive, on the west side of the town. A third location (Shakespeare's South) opened on Peachtree Drive, off of Providence Road on the south side of Columbia in 2012. On April 1, 2015 it was announced that their iconic downtown location would be demolished to make way for more student housing. 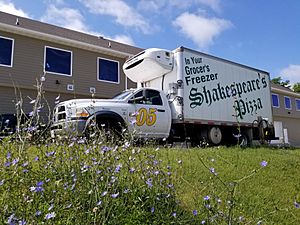 All content from Kiddle encyclopedia articles (including the article images and facts) can be freely used under Attribution-ShareAlike license, unless stated otherwise. Cite this article:
Shakespeare's Pizza Facts for Kids. Kiddle Encyclopedia.