The Shakespeare Theatre of New Jersey is one of the largest professional Shakespeare companies in North America, serving over 100,000 adults and children annually. Located in Madison, New Jersey, it is the state's largest theatre company dedicated to the works of Shakespeare and other classic masterworks, including rarely produced epics not often produced by other theatres.

Under the leadership of artistic director Bonnie J. Monte since 1990, The Shakespeare Theatre of New Jersey is also the longest-running Shakespeare theatre on the east coast, and is listed as a Major Festival in the book Shakespeare Festivals Around the World by Marcus D. Gregio (Editor), 2004.

In both 2002 and 2006, The Star-Ledger named the company "Regional Theatre of the Year." In 2002, the Geraldine R. Dodge Foundation awarded the Theatre a $1 million Strategic Partnership Grant "in recognition of the artistry, achievements and leadership of this acclaimed Madison, New Jersey-based performing arts and education organization."

The company's annual Main Stage season runs from May to December, presented at the F.M. Kirby Shakespeare Theatre on the campus of Drew University in Madison, a short walk from Madison's downtown. An Outdoor Stage production is presented each summer at The Greek Theatre, an open-air grass-and-stone amphitheatre inspired by the Theatre of Dionysos in Athens, and one of the only theatres of its kind in the United States to host a professional company. It is located on the College of Saint Elizabeth campus in nearby Florham Park, New Jersey.

The company employs more than 250 members during the season and through its Main Stage, Outdoor Stage, and touring productions plays to approximately 100,000 audience members each year, primarily from the New Jersey, New York, Connecticut, and Pennsylvania region.

The Shakespeare Theatre of New Jersey was founded by Paul Barry in 1963 as the New Jersey Shakespeare Festival, part of a summer-stock season at the Cape May Playhouse in the resort town of Cape May, N.J. After 7 summer seasons in Cape May, three fall seasons in Boston, and two fall tours, the Festival was without a home. With the help and encouragement of Dr. Robert F. Oxnam, President of Drew University (1961-1974), the Festival relocated in 1972 to a permanent home on the campus of [[Drew University]. Productions were staged in the University's Bowne Gymnasium, which Festival technicians converted into a performance space. Paul Barry, Artistic Director, and his wife, Ellen Barry, Producing Director, led the Festival for 27 seasons through 1990.

In October 1990, the Board hired Bonnie J. Monte to take the helm as Artistic Director. Monte had served as the Associate Artistic Director at Williamstown Theatre Festival in Massachusetts under Nikos Psacharopoulos from 1981 to 1989 and was one of the casting associates at the Manhattan Theatre Club from 1989 to 1990.

Monte, along with former Managing Director Michael Stotts, revitalized the company and spearheaded the complete renovation of the old Bowne Gymnasium. In June 1998, The F.M. Kirby Shakespeare Theatre, a 308-seat performance space, officially opened. The new Kirby Theatre allowed for a significant expansion of the performance season into the fall and early winter months. The company now produces six to seven Main Stage shows each year. In 2003, the company renamed itself The Shakespeare Theatre of New Jersey, providing a clearer identity.

The Shakespeare Theatre's production history from 2000 to the present.

2013 Season
The Playboy of the Western World by J.M. Synge
Fallen Angels by Noël Coward
Tovarich by Jacques Deval, adapted by Robert E. Sherwood
The world premiere production of A Most Dangerous Woman by Cathy Tempelsman
Our Town by Thornton Wilder
Pericles by William Shakespeare
ON THE OUTDOOR STAGE: As You Like It by William Shakespeare

In late 1990, the need to secure a viable and lasting home for the company was recognized. The 88-year-old Bowne Theatre had become a serious impediment to artistic and organizational success. The Shakespeare Theatre management and Board set out to create a partnership with Drew University.

After a successful $7.5 million capital campaign, in June 1998, the Theatre raised the curtain on its 36th season in the F.M. Kirby Shakespeare Theatre at Drew University, on the site of the old Bowne Gymnasium. 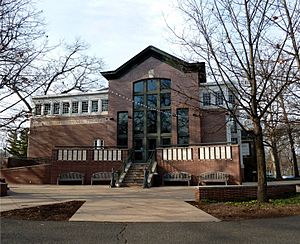 Features of the Theatre include:

The Greek Theatre at the College of St. Elizabeth

The Theatre's Outdoor Stage is located on the campus of the College of Saint Elizabeth in nearby Florham Park. The grass-and-stone amphitheatre, inspired by the Theatre of Dionysos in Athens and one of the only theatres of its kind in the United States hosting a professional theatre company, debuted as a new performance space for the company in 2002. The venue accommodates approximately 500 audience members.

Early in 2012, the Theatre acquired and renovated an old valve factory in an effort to centralize all of the institution's behind-the-scenes operations and to allow for an expansion of its myriad education programs.

The Apprentice Company is designed for aspiring young actors in the early stages of training with little or no professional experience. While a variety of classes are offered, the primary focus of the training is on Shakespeare and other classic works.

The Intern Company is designed for college students and early-career theatre professionals interested in specific fields other than acting. Interns work in one department for the duration of the training program, under the direction of The Shakespeare Theatre's professional staff. Some prior experience in the field of interest is necessary for most internships.

The Next Stage Ensemble fosters the work of early career actors and provides training in ensemble-based performance techniques. Participants work with The Shakespeare Theatre of New Jersey resident directors and guest directors on fully developed productions of abridged classics and tour to over 30 locations throughout the region - including libraries, retirement homes, and community centers. The plays are rehearsed and performed in repertory.

Introduced in the spring of 2013, The Shakespeare Theatre Academy offers youth and adult classes in a wide range of disciplines connected with classic theatre as well as weekend intensives on the art of auditioning.

Focusing primarily on students in grades 5-8, the Pages to Players residencies take place during regular English/Language Arts class periods and often involve one or more entire grade levels at the school. Students work with Shakespeare Theatre teaching artists who lead the residency activities. Because these residencies are based in the English classroom, the primary focus is on using performance and the theatrical tradition as tools for achieving greater proficiency and pleasure in the study of the English language generally, and Shakespeare in particular. Students are also introduced to many of the fundamental exercises utilized by theatre artists, such as ensemble-building techniques, vocal projection, diction, focus and memory systems, and others which can have a lifelong impact. Other education programs include: the Lend Us Your Ears play reading series, the Symposium post-performance lecture series, the Know The Show pre-performance discussion series, ShakeFest, Shakesperience, LIVE! at The Kirby, and the Student Matinee performances.

All content from Kiddle encyclopedia articles (including the article images and facts) can be freely used under Attribution-ShareAlike license, unless stated otherwise. Cite this article:
Shakespeare Theatre of New Jersey Facts for Kids. Kiddle Encyclopedia.