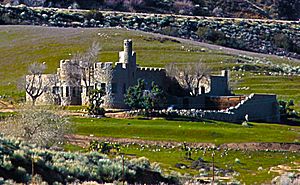 Shea’s Castle, also known as Sky Castle and Castle Ranch, is a private castle built in 1924 by the developer Richard Peter Shea. Shea, a New Yorker, moved to the dry climate of Southern California in hopes of improving the health of his wife, Mary. Shea made his fortune developing Hancock Park in Los Angeles. He spent two years building the castle on about 1,500 acres (6 km²) of land in the Antelope Valley, just west of Lancaster and just south of the Antelope Valley California Poppy Reserve. The cost of building the castle (at the time) was $175,000.

The Stock Market Crash of 1929 bankrupted Shea. The bank took over the castle and Shea died penniless.

A variety of owners and renters have occupied the castle since. Roy Rogers trained his horse Trigger there. A non-profit flying group added a runway, dam and lake there. The millionaire playboy Tommy Stewart Lee purchased the house in 1948.

The castle has seen its share of development plans as well, but to this day it remains pretty much unchanged. There are pictographs on the property, as well as natural springs. It has been a location for 1967's Blood of Dracula's Castle, 2008's Alive or Dead, and TV shows such as Airwolf, Bat Masterson, Buffy the Vampire Slayer (Season 5 Episode 1), Harry O, The Rat Patrol, and Starsky & Hutch.

It is currently a private residence.

All content from Kiddle encyclopedia articles (including the article images and facts) can be freely used under Attribution-ShareAlike license, unless stated otherwise. Cite this article:
Shea's Castle Facts for Kids. Kiddle Encyclopedia.