Sherburne National Wildlife Refuge is a National Wildlife Refuge of the United States in Sherburne County, Minnesota. The 30,700-acre (124 km2) refuge protects mixed habitat types including oak savanna, Big Woods, and wetlands. The St. Francis River flows through the eastern side of the park. Over 230 species of birds, 58 species of mammals, and 25 species of reptiles and amphibians have been recorded in the refuge. 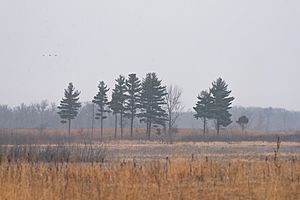 Native American village sites dating back to 1300 CE have been found within the refuge, although the area is assumed to have been inhabited for much longer. The mixture of habitats and abundance of water bodies produced a large and diverse wildlife population. The first European settlers arrived in the 1870s. As land use was altered for agriculture, wildfire was suppressed and drainage ditches were cut. This had the effect of reducing the number of year-round wetlands and increasing the density of the wooded areas.

By the 1940s conservationists and sportsmen recognized the former quality of the area and its potential for restoration. Minnesota's conservation department investigated the possibility of creating a state wildlife area. It was ultimately conceded that the state simply did not have the funds to acquire the land from its nearly 300 separate owners, and in 1960 a formal request was made to the United States Fish and Wildlife Service to consider the site for federal protection. This was formally approved on May 18, 1965, and purchase of refuge lands was begun with revenue from the sale of duck stamps. 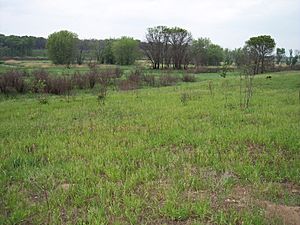 In winter most of the refuge lands are open for cross-country skiing, snowshoeing, and hiking. From March 1 to August 31 visitor access is restricted to the following areas so that wildlife can breed without disturbance.

Hikers can pick berries and mushrooms for personal consumption within 100 feet of the trails. Big game, small game, and waterfowl hunting seasons are held in the fall.

The entire refuge is for day-use only. Overnighting visitors are referred to a campground in the adjacent Sand Dunes State Forest.

All content from Kiddle encyclopedia articles (including the article images and facts) can be freely used under Attribution-ShareAlike license, unless stated otherwise. Cite this article:
Sherburne National Wildlife Refuge Facts for Kids. Kiddle Encyclopedia.