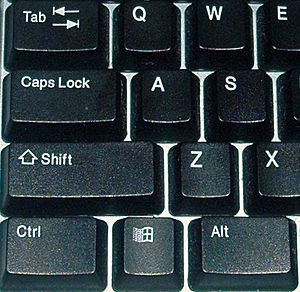 The shift key on a Windows keyboard

The shift key is a key on a computer keyboard. It is used to type capital letters (like this: "ABC") instead of lowercase ("abc").

The shift key is also used to type with keys that have more than one symbol on them, such as the number keys and those for punctuation marks. In this case it is used to type the "upper" characters, that is, the symbol that appear above the other. The symbol below does not need the shift key to be pressed. On an English keyboard, these are some of the characters that need the shift key to be pressed down in order to type them:

Instead of using the shift key, one can also use the caps lock or shift lock keys. This lets one type many uppercase letters at once without having to hold down the shift key all the time.

All content from Kiddle encyclopedia articles (including the article images and facts) can be freely used under Attribution-ShareAlike license, unless stated otherwise. Cite this article:
Shift key Facts for Kids. Kiddle Encyclopedia.