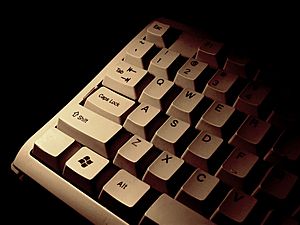 the caps lock is on the left 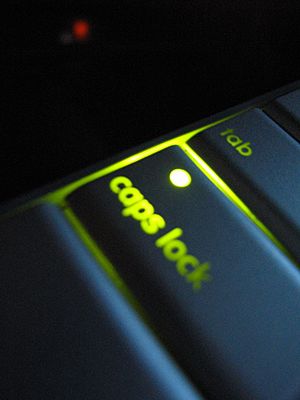 Picture of a caps lock key

Caps lock is the name of a key on a computer keyboard. When you press this key, letters that you type will be capital letters (like this, "ABC"), instead of lowercase ("abc"). The caps lock key is usually above the Shift key and below the Tab key on the left side of the keyboard. However, some people prefer it to be in other locations.

The way the caps lock key works is that once you press it, a light may come on, or you may get a message on the screen. This lets you know that text that you type will be in uppercase letters. When you press the key again, the light turns off, or another message may appear, saying that caps lock has been turned off and text you type will be back to lowercase letters.

Some keyboards and typewriters have a key called shift lock. It is a lot like the caps lock key in that letters you type will be in uppercase instead of lowercase. But shift lock also does something else: when it is on, keys which have two symbols on them, such as the number keys in the top row, will print the symbol on top, instead of the symbol on the bottom. For example, pressing the key with the number 1 on it will print the exclamation mark ("!") instead of the number 1. The caps lock key does not do this; it only affects the letter keys.

People who type a lot, such as those who use typewriters, use the shift key instead of the caps lock or shift lock keys unless they have to type many capital letters in a row. But there is also a neat trick you can do with the caps lock and shift keys: when caps lock is on, you can hold the shift key while typing and what you type will be in lowercase letters instead of capitals. This can be done on some computers, such as those running Microsoft Windows computers.

Not all computers have a caps lock key. Some of those that don't have been made for the One Laptop Per Child program.

All content from Kiddle encyclopedia articles (including the article images and facts) can be freely used under Attribution-ShareAlike license, unless stated otherwise. Cite this article:
Caps lock Facts for Kids. Kiddle Encyclopedia.