Although "the Hamptons" officially begins about 10 miles (16 km) west at Westhampton, New York, the Shinnecock Canal, which funnels traffic across bridges for the Sunrise Highway, Montauk Highway, and Long Island Rail Road, marks their beginning in popular imagination.

The original Shinnecock Canal was dug in 1892. To alleviate tidal differences of 3 feet (0.91 m) and more between Peconic Bay to the north and Shinnecock Bay, construction of "tide gates" and bulkheading (not a canal lock as exists today ) began in 1918. This did not alleviate the difference in elevation between the canal's two ends but sought to mitigate it. Another effect of this as found in the records of the New York State Salt Water Bays Commission was the water level of Shinnecock Bay was raised by one foot. 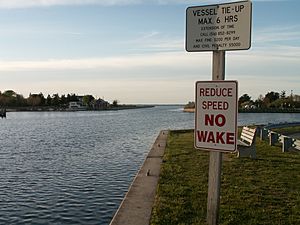 Looking north toward Peconic Bay from the Shinnecock Canal

The lock system now is the only navigation lock operating on Long Island. The lock increased the salinity levels in Shinnecock Bay which had nearly assumed fresh water proportions and was resulting in a dying off of its shellfish population even though it was separated from the Atlantic by a narrow barrier island. Shinnecock Bay's salinity levels were solidified during Great Hurricane of 1938 which broke through the barrier island to form Shinnecock Inlet almost due south of the canal. The new inlet has created a short cut to the Atlantic that is now used by 27,000 boats per year.

The name Canoe Place comes from the Indian word "Niamuck", which described a canoe portage between the two bays. This portage indicates that there was no viable water connection between them. There is no evidence that the Montauketts or Shinnecocks dug a canal, together or separately.

All content from Kiddle encyclopedia articles (including the article images and facts) can be freely used under Attribution-ShareAlike license, unless stated otherwise. Cite this article:
Shinnecock Canal Facts for Kids. Kiddle Encyclopedia.