The shooter's sandwich is a steak sandwich consisting of cooked steak and mushrooms placed inside a hollowed-out loaf of bread and then weighted down. This popular English sandwich is likened to beef Wellington using bread rather than pastry. 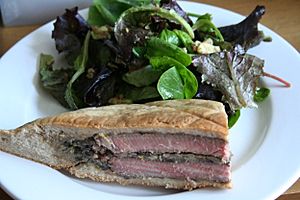 A shooter's sandwich with salad

A shooter's sandwich is prepared by filling a long, hollowed-out loaf of bread with cooked filet mignon steak, cooked mushrooms, salt, and pepper. Weights are then placed atop the sandwich to squeeze it down. Typically the sandwich is weighted down overnight, which causes meat juices to soak into the bread.

The shooter's sandwich originated in England during the Edwardian era. It was created as a way for hunters to bring a hearty lunch with them. It is now enjoyed both for at-home meals or as a portable food item when travelling.

A similar sandwich appears in Le Guide Culinaire published in 1903 by Auguste Escoffier (entry number 4962) and is referred to as a "Bookmaker's Sandwich."

On November 13, 1996, the cooking show Two Fat Ladies demonstrated how to prepare a shooter's sandwich (Season 1 Episode 6, "Food in the Wild").

The sandwich became a minor Internet meme after an April 7, 2010 article written by Tim Hayward and published by The Guardian declared the shooter's sandwich the best sandwich in the world. The Guardian's article also described the sandwich as a "triumph of Edwardian cuisine".

All content from Kiddle encyclopedia articles (including the article images and facts) can be freely used under Attribution-ShareAlike license, unless stated otherwise. Cite this article:
Shooter's sandwich Facts for Kids. Kiddle Encyclopedia.