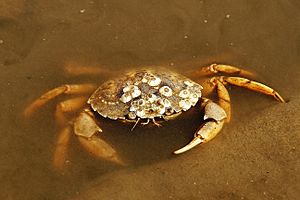 Shore crabs (Carcinus maenas) are a common crustacean. They are often found around the sea shore.

They come in a variety of colours. They are often green or brown. They have eight legs and two large pincers. The width across the shell is up to 5 centimetres (2.0 in). The usual width is about 2 to 3 centimetres (0.79 to 1.18 in).

They are normally found in the North Atlantic or the Baltic Sea but are beginning to live in many other areas of the world. Shore crabs live on beaches and rocky shores.

Shore crabs are a nocturnal predator which means it hunts at night. They eat small crustaceans, molluscs, worms and some fish.

A female shore crab can lay up to nearly 200 thousand eggs at once. They carry the eggs with them until they hatch. Like most crabs, when a shore crab gets too big for its shell, it sheds its shell. After that, it has a new soft shell which soon hardens.

All content from Kiddle encyclopedia articles (including the article images and facts) can be freely used under Attribution-ShareAlike license, unless stated otherwise. Cite this article:
Shore crabs Facts for Kids. Kiddle Encyclopedia.