Shovel Down facts for kids

Shovel Down is an area of Dartmoor in Devon that is covered in megaliths including the remains of several stone rows, the Fourfold Stone Circle, and several standing stones.

The Shovel Down stone row complex occupies the northern and southern slopes of a broad east-west ridge of unenclosed moorland. It is of probable Bronze Age date. Approximately five double stone rows and one single stone row are to be seen. Other probable Bronze Age monuments are in the immediate area, including the Fourfold Circle, the Long Stone, the Three Boy's Stone, and several cairns. 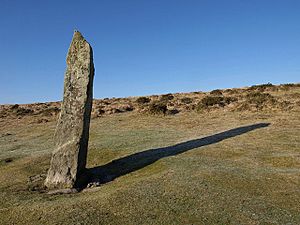 The Long Stone stands in the middle of two stone rows. It is referred to as the "Langstone" in a documentary source of 1240. It now marks the boundary of three parishes.

The Three Boys standing stone is a stone marking the southern end of one of the stone rows. It is the only survivor of three such stones known as the Three Boys. The two other stones are believed to have been taken for use as gateposts.

All content from Kiddle encyclopedia articles (including the article images and facts) can be freely used under Attribution-ShareAlike license, unless stated otherwise. Cite this article:
Shovel Down Facts for Kids. Kiddle Encyclopedia.