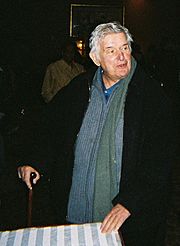 Sid Bernstein (August 12, 1918 – August 21, 2013) was an American music producer and promoter. Bernstein changed the American music scene in the 1960s by bringing The Beatles, The Rolling Stones, Herman's Hermits, The Moody Blues, and The Kinks to America. He was the first impresario to organize rock concerts at sports stadiums.

Bernstein was born in New York City, New York on August 12, 1918. He was married to Geraldine Gale until his death in 2013. They had six children. Bernstein died on August 21, 2013 from natural causes in his home in Manhattan, New York, aged 95.

All content from Kiddle encyclopedia articles (including the article images and facts) can be freely used under Attribution-ShareAlike license, unless stated otherwise. Cite this article:
Sid Bernstein Facts for Kids. Kiddle Encyclopedia.