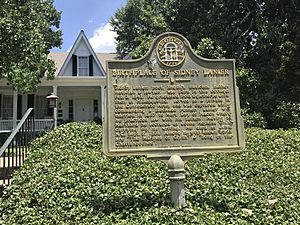 Sidney Lanier (1842-1881) was born in the High Street home of his grandfather, Sterling Lanier. Lanier is best known for his regional poems, including The Marshes of Glynn, The Song of the Chattahoochee, and Sunrise. Lanier's parents, Sterling Robert Sampson Lanier and Mary Jane Anderson Lanier, were living in nearby Griffin, Georgia, but Mary Jane went to the home of her in-laws in Macon to give birth to her first child.

The white frame Victorian home was built in 1840 as a four-room cottage, though it was altered extensively over the years. In 1879, the building was moved fifty feet and the family added two rooms to the second floor as well as a porch. The home was renovated to its present Gothic Revival style in 1880. 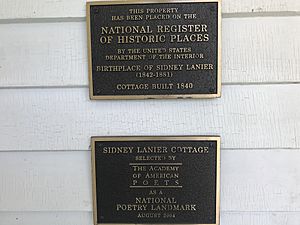 The home served as a private residence for many years before its purchase by the Middle Georgia Historical Society in 1973. Sidney Lanier Cottage was opened to the public in 1975. Now part of the Macon Historic District, the Sidney Lanier Cottage includes various artifacts representing the author's life and work, including the silver alto flute that he used while playing for Baltimore's Peabody Orchestra and first editions of his books. Also included in the museum is a wedding dress from 1867 that belonged to Mary Day, Lanier's wife, and photographs of the couple. The museum is operated by the Historic Macon Foundation.

The museum is open Monday through Saturday from 10 until 4. Guided tours are available on Fridays and Saturdays, with the last tour being held at 3:30. The Sidney Lanier Cottage is available to be rented out for various activities, such as weddings and corporate events.

All content from Kiddle encyclopedia articles (including the article images and facts) can be freely used under Attribution-ShareAlike license, unless stated otherwise. Cite this article:
Sidney Lanier Cottage Facts for Kids. Kiddle Encyclopedia.