Griffin is a city in and the county seat of Spalding County in the U.S. state of Georgia. It is part of the Atlanta metropolitan area. As of the 2010 census, the city had a population of 23,643.

Griffin was founded in 1840 and named for landowner Col. Lewis Lawrence Griffin. Several notable people are from Griffin and the city has been filmed for several notable shows and movies.

The Macon and Western Railroad was extended to a new station in Griffin in 1842.

In 1938, Alma Lovell had been distributing religious Bible tracts as a Jehovah's Witness but was arrested for violating a city ordinance requiring prior permission for distributing literature. In Lovell v. City of Griffin, the U.S. Supreme Court found that the city had violated her First Amendment and Fourteenth Amendment rights. 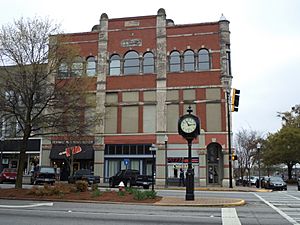 Griffin raised two batteries of Field Artillery for the Spanish–American War, Batteries A and B, Georgia Volunteer Light Artillery, which was organized as follows:

One of the officers resigned before the unit was mustered out. Three of the enlisted men transferred to other units, six were discharged for disability, ten were discharged for various reasons, two died of disease, and four deserted. Neither unit actually left Griffin.

There were 8,876 households out of which 33.0% had children under the age of 18 living with them, 38.1% were married couples living together, 24.1% had a female householder with no husband present, and 32.9% were non-families. 27.7% of all households were made up of individuals and 11.1% had someone living alone who was 65 years of age or older. The average household size was 2.60 and the average family size was 3.17.

The Griffin Warriors, a World Basketball Association team, played at the high school in 2006.

All content from Kiddle encyclopedia articles (including the article images and facts) can be freely used under Attribution-ShareAlike license, unless stated otherwise. Cite this article:
Griffin, Georgia Facts for Kids. Kiddle Encyclopedia.