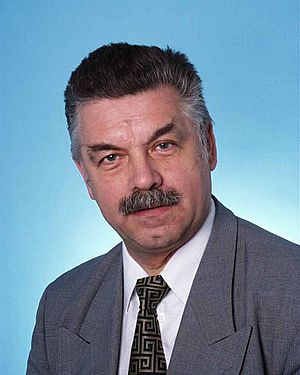 Siegfried Johannes Gottwald (30 March 1943 – 20 September 2015) was a German mathematician, logician and historian of science. For his work to set theory, he became well known. He taught at the Leipzig University from 1972 to his retirement in 2008. He wrote seven published books between 1973 and 2001.

Gottwald was born in Limbach, Saxony. He studied mathematics at the Leipzig University from 1961 to 1966. He was married with three children.

All content from Kiddle encyclopedia articles (including the article images and facts) can be freely used under Attribution-ShareAlike license, unless stated otherwise. Cite this article:
Siegfried Gottwald Facts for Kids. Kiddle Encyclopedia.