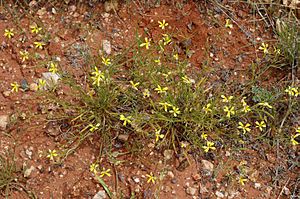 Goodenia fascicularis, commonly known as silky goodenia, is a species of flowering plant in the family Goodeniaceae and is widely distributed in eastern continental Australia. It is an ascending perennial herb with linear to egg-shaped leaves and racemes of yellow flowers.

Goodenia fascicularis was first formally described in 1890 by Ferdinand von Mueller and Ralph Tate in the Transactions, proceedings and report, Royal Society of South Australia from material collected in the Basedow Range (near Imanpa) in the Northern Territory, during the Tietkens expedition to Central Australia. The specific epithet (fascicularis) means "belonging to a small bundle".

This goodenia grows in a wide range of habitats including scrub, woodland and grassland west of Tamworth in New South Wales, in northern and north-western Victoria, and in Queensland, the Northern Territory and South Australia.

All content from Kiddle encyclopedia articles (including the article images and facts) can be freely used under Attribution-ShareAlike license, unless stated otherwise. Cite this article:
Silky goodenia Facts for Kids. Kiddle Encyclopedia.