Hakea leucoptera, commonly known as silver needlewood, needle hakea, pin bush or water tree and as booldoobah in Koori language, is a shrub or small tree with rigid, cylindrical, sharply pointed leaves and white, cream-coloured or yellow flowers in late spring and early summer. It is widespread and common in central parts of the Australian mainland. 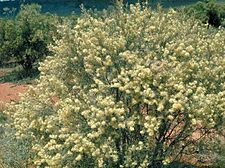 The habit of this plant is highly variable. It can be a small open branched tree to 5 m (20 ft) or a small multi stemmed shrub to 3 m (10 ft). The habitat is usually coarse textured soils and associated with a wide variety of species in woodland communities. It is widespread throughout all mainland states occurring in dense thickets of shrubs, as scattered individual trees or a large parent tree surrounded by offspring. It has a reddish-brown close-grained timber that is soft but hard and brittle when dry.

The silvery grey to grey-blue leaves are arranged alternately along the stems. They are rigid and cylindrical in varying length from 8–35 mm (0.3–1 in) long and approximately 1.5 mm (0.06 in) wide with a sharp pointed tip. The young leaves are hoary but as they mature they become smooth. 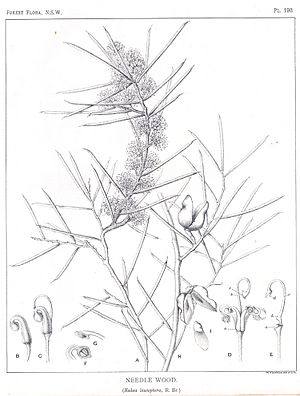 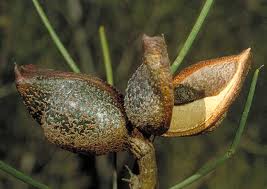 Showy creamy white flowers are formed on short hairless stalks about 4 mm (0.2 in) long in clusters of 20 or more in axillary racemes. Hakea leucoptera flowers from late spring to summer. Fruit comprises a woody follicle about 20–30 mm (0.8–1 in) long which is swollen at the base but tapers to a point. The capsules open in halves longitudinally revealing 2 seeds that have an opaque wing on one side only. The woody seed can persist on the branches until after the following years flowering. Immature seed will not ripen off the plant and it is best to collect older fruits. Crop size varies from year to year. Once removed the fruits usually dry out and open within 1–2 weeks. It is easily grown from fresh seed which usually germinates in 3–6 weeks and seed is suitable for direct seeding.

Hakea leucoptera was first formally described in 1810 by Robert Brown and the description was published in Transactions of the Linnean Society of London. The specific epithet (leucoptera) is derived from the Ancient Greek words leukos meaning "white" and pteron meaning "feather", "wing" or "fin".

Hakeas are closely related to the genus Grevillea and Finschia, both members of the subfamily Grevilleoideae within the family Proteaceae. Many species have similar inflorescences, but hakeas can be distinguished by their woody seed pods. Hakeas belong to the family Proteaceae, which includes such well known plants as Banksias, Grevilleas and Waratahs.

There are around 150 species of Hakeas and they are only found in Australia. They occur in most areas of Australia in a wide range of habitats. Many are found in arid areas but they also occur in forests and heath lands and swampy areas.

Many Hakeas have narrow leaves with sharp points which lead to common names such as "needle bush" and "needle points" This is an adaption to avoid drying out as very little leaf area is exposed to the sun and moisture loss from the leaf surface is reduced.

Most Hakeas are shrubs, some are low ground-hugging plants and others are small trees to about 10 metres. The flowers of most Hakeas resemble those of their close relative, Grevilleas with axillary clusters or racemes.

One of the main distinguishing features between Hakeas and Grevilleas is that Hakeas have woody fruits. The fruits open into two valves to reveal two seeds with a membranous wing. The seeds fit into cavities in the woody case and many make very attractive designs when the seed is released. Many of the seed cases are decorative. Some are quite large. Many have unusual shapes or they are rough with "bubbly" warts or tubercules which add interest and texture to a garden. Some Hakeas have long racemes up to 20 centimetres long.

It is found in every state of Australia except Tasmania and is commonly known as a dry country species particularly arid and semi arid regions.

Shrubby forms are palatable to stock but only in times of acute feed shortage.

Smoking pipes have been manufactured from the roots and in 1895 the Australian Needle-wood Pipe Company was formed in Sydney.

This plant was important to the Indigenous people and inland explorers as they sourced water from the roots. The tree was burnt which forced the water into the root system, then the roots were dug up. They were stripped, one end placed over a slow fire while the other over a container to force the water out. This feature also enabled the plant to quickly regenerate after fire.

A sweet nutritious drink was made by dipping heavily laden blossom into a cup of water or by sucking the flowers directly. Hakea leucoptera flowers produce a high quality honey favoured by bees.

The Indigenous people of inland Australia used corkwoods as a medicinal agent. Burns and open sores were directly applied with the burnt bark of the Hakea tree or the burnt bark mixture was combined with animal fat to make a healing ointment.

The seed pods were also used for decoration by Indigenous people. The timber polishes up well and haves a very showy grain and was also used for small tannery articles.

All content from Kiddle encyclopedia articles (including the article images and facts) can be freely used under Attribution-ShareAlike license, unless stated otherwise. Cite this article:
Silver needlewood Facts for Kids. Kiddle Encyclopedia.