The Simpsonville Mill is a historic pre-colonial mill complex in Simpsonville, Maryland, part of the Columbia, Maryland land development.

The Stone mill ruins are located under the Cedar lane bridge spanning the Middle Patuxent River adjacent to the James and Anne Robinson Nature Center. 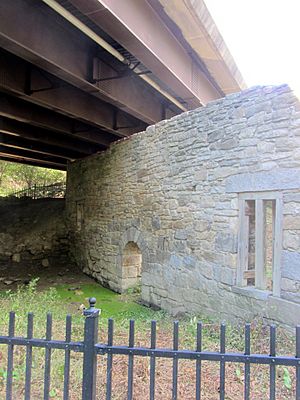 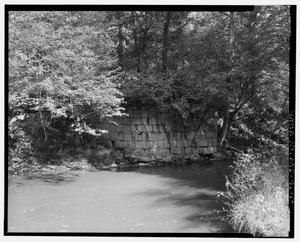 Headgate for the mill

The Mill has been known as Joshua Warfield's mill, Richard Owing's Mill, and Simpsonville Mill. Annapolis-raised John Hobbs Jr purchased property along the Middle Patuxent River Valley in 1741, selling it to Joshua Dorey in 1749. In 1768, Joshua Dorsey listed the stone mill in his will. The property was acquired by Vachel Worthington in 1789. Richard Owings purchased 11 acres surrounding the mill in 1796 and expanded the property to 1000 acres. The Owings brothers operated several local mills when Napoleonic Wars caused a brief surge in flour prices, making operations very profitable at $11.00 or more a barrel, but declined shortly afterward. In 1852, Charles Ridgley Simpson bought 215 acres surrounding the mill. Production shifted to wool cloth with six employees manning six spindles, four looms, and two carders. William Simpson inherited the mill after his brother's death in 1854. After the conclusion of the Civil War, William Bradshaw operated the mill from 1865 until his death in 1877. The mill was auctioned off and the Ellicott City Times described the mill at this time as

A large three story woolen factory driven by a new turbine wheel of 25 horsepower. Grist Mill, and Saw Mill, Blacksmith and Wheelwright Shop. A Store Building with eight dwelling houses, A large switzer barn with stabling for twelve horses with all necessary farm buildings 215 acres under cultivation and good fencing

James Simpson brought the mill back to the Simpson family in 1878 who subsequently sold off a small parcel of the property and converted from wool production back to milling. Justice of the Peace Charles R. and Mary Wilson owned the mill from 1904 to 1909. From 1909 to 1934 former Howard County Commissioner William Welling Iglehart purchased the property with his brother John Iglehart. Iglehart operated the building as a Sawmill, Grist Mill and pre-prohibition basement Cider Mill with production decreasing rapidly by 1915. In 1917 John Iglehart took over. In 1920, a mill fire gutted the building, leaving the stone walls mostly intact. As the Great depression hit, the Eueka-Maryland Assurance Company took over in 1934 after the Igleharts defaulted on a mortgage. In 1963, Howard Research and Development purchased the property.

Howard Research and Development (Rouse Corporation) purchased the 58.5 acre site during the formation of the Columbia, Maryland development changing the land to "New Town" zoning which was later changed to R-ED (Residential - Environmental). In 1977, A new bridge was proposed across the middle Patuxent River at a raised height of 14 feet above water level. A historic inventory was performed in 1979 with little mention of the building's history, noting that it was up to the developer if they chose to submit the property to the national register. In 1993, a State highway project realigned a bridge across the Middle Patuxent to span the Simpsonville Mill site. A $350,000 Archeological dig was performed, finding a dozen homes, a blacksmith and wheelwright shop including evidence of a post office and other shops. A portion of the land forms the Middle Patuxent Environmental Area. In 1994 the Maryland State Highway Administration announced it would build a bridge over the historic mill with matching stone arches. Project engineer John Murphy was quoted "It really will be something. It's going to be beautiful,"

In 2014, the millsite was placed on the Preserve Howard top ten most endangered list due to delays transferring the property from the state highway administration. In 2015, the site ownership was transferred to Howard County, remaining on the endangered list.

The Mill stood at the center of a small milling district that was deemed eligible for three out of four categories for the National Register of Historic Places.

All content from Kiddle encyclopedia articles (including the article images and facts) can be freely used under Attribution-ShareAlike license, unless stated otherwise. Cite this article:
Simpsonville Mill Facts for Kids. Kiddle Encyclopedia.