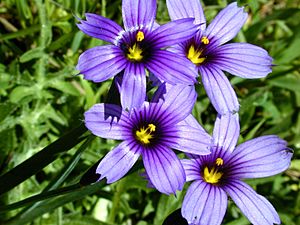 Flowers are 10.5–17 mm and bluish-purple, bluish violet to pale blue, sometimes even white. Petals tips are notched or flattened with a little point.

Sisyrinchium bellum grows as a perennial plant in open places where there is some moisture, particularly grassy areas, though it can also be found in woodlands and at altitudes up to 2,400 metres (7,900 ft). Like other species of blue-eyed grasses that are locally dominant, it is generally known simply as "blue-eyed grass" within its natural range.

The stems of Sisyrinchium bellum can grow as long as 60 centimetres (24 in), though they are often shorter. Its leaves are grassy and tufted. The flowers are 1–2 centimetres (0.39–0.79 in) in diameter and purplish-blue, varying somewhat in color from a true blue to a definite purple; occasional white-flowering plants are found. It flowers from March to July with a peak in April. Dried in air, its seeds weigh between 1 and 4 mg. After flowering, it dies to the ground and is dormant over the summer.

The Ohlone used an infusion of the roots and leaves as a cure for indigestion and stomach pain, and similar uses are recorded from other Native American peoples.

All content from Kiddle encyclopedia articles (including the article images and facts) can be freely used under Attribution-ShareAlike license, unless stated otherwise. Cite this article:
Western blue-eyed grass Facts for Kids. Kiddle Encyclopedia.