The Parkersburg Bridge crosses the Ohio River between Parkersburg, West Virginia, and Belpre, Ohio. Designed by Jacob Linville, the bridge has 46 spans: 25 deck plate girder, 14 deck truss, 6 through truss, and 1 through plate girder. 50,000 cubic yards (38,000 m3) of stone were used for the 53 piers. The bridge was constructed from May 1869 to January 1871 by the Baltimore and Ohio Railroad. At the time of its completion, the bridge was reportedly the longest in the world at 7,140 feet (2,180 m). 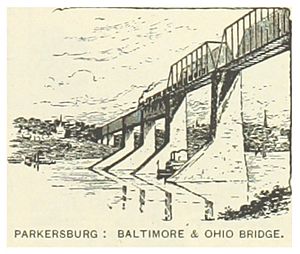 The approach spans were replaced 1898–1900, and the river spans were replaced 1904–1905. The original piers were retained. The steel structure atop the piers was rebuilt between about 1914 and 1917. One channel span was replaced in 1972 after a barge transporting an empty gasoline tanker exploded under the bridge.

The bridge was a part of the B&O's Baltimore – St. Louis mainline and offered the railroad easy access to Ohio in transporting coal and other materials to the east coast. Currently the bridge handles traffic on CSX Transportation's Marietta Subdivision.

It was listed on the National Register of Historic Places in 1982 under the name Sixth Street Railroad Bridge. At the time of the listing, the bridge was still owned by the Baltimore and Ohio Railroad.

All content from Kiddle encyclopedia articles (including the article images and facts) can be freely used under Attribution-ShareAlike license, unless stated otherwise. Cite this article:
Parkersburg Bridge (CSX) Facts for Kids. Kiddle Encyclopedia.