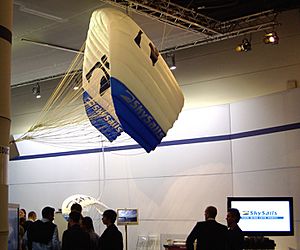 SkySails GmbH & Co. KG is a Hamburg-based company that sells kite rigs to propel cargo ships, large yachts and fishing vessels by wind energy. Ships are pulled by an automatically-controlled foil kite of some hundreds of square meters. For multiple reasons, they give many times the thrust per unit area of conventional mast-mounted sails.

The systems save fuel, and reduce carbon emissions and shipping costs, but have not been widely adopted.

The SkySails propulsion system consists of a large foil kite, an electronic control system for the kite, and an automatic system to retract the kite.

The kite, while 1-2 orders of magnitude larger, bears similarities to the arc kites used in kitesurfing. However, the kite is an inflatable rather than a ram-air kite. Additionally, a control pod is used rather than direct tension on multiple kite control lines; only one line runs the full distance from kite to ship, with the bridle lines running from kite to control pod. Power to the pod is provided by cables embedded in the line; the same line also carries commands to the control pod from the ship.

The kite is launched and recovered by an animated mast or arm, which grips the kite by its leading edge. The mast also inflates and deflates the kite. When not in use, mast and deflated kite fold away.

A conventional ship with a SkySails system burns less fuel, and has two propulsion methods, making it a type of hybrid vehicle. SkySails' kite propulsion from upper wind power is a traction use of high altitude wind power. Up to 100 million tons of carbon emissions every year could be saved by widespread use of SkySails technology, according to the International Maritime Organization.

Other companies, such as California-based KiteShip, have built similar technology.

The company was founded in 2001 by engineers Stephan Wrage and Thomas Meyer. In addition to the headquarters in Hamburg, a test facility was set up in Wismar. In the weak economy of 2012, a time of low investment by shipping companies, the company laid off half of its 80 employees. As of January 2016, it employs 50 people. SkySails sources its kites from North Sails New Zealand.

The company, while technically successful at cutting shipping costs and carbon emissions, has faced economic difficulties.

There’s a structural problem slowing down the process: ship owners (who have to make the investment) often don’t pay for the fuel – that’s the charterer’s duty. The charterer on the other side doesn’t charter the ship for long enough a period to make low-carbon technologies pay back.

Fuel costs mostly get passed onto the shipper so we see little use in installing potentially expensive, untested technology to which we see no other benefit. Basically I am interested but will not be the first to try it on a large scale.

The lack of carbon emissions regulations for shipping and low fuel prices have added to these difficulties.

All content from Kiddle encyclopedia articles (including the article images and facts) can be freely used under Attribution-ShareAlike license, unless stated otherwise. Cite this article:
SkySails Facts for Kids. Kiddle Encyclopedia.