The kite can be used for many applications. Air kites, water kites, bi-media kites, fluid kites, gas kites, kytoons, paravanes, soil kites, solid kites, and plasma kites have niche applications that are furthering the interests of humans in both peace and conflict. Non-human-made kites have applications; some spiders make use of kiting.

Chinese dragon kite more than one hundred feet long which flew in the annual Berkeley, California, kite festival in 2000. It is a kite-train of hundreds of linked circles (with outriggers ending in feathers for balance). The dragon's head is a bamboo frame with painted silk covering. Application: entertainment, recreation, event promotion, city or institution promotion. 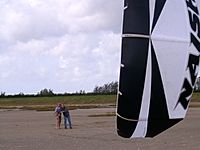 William A. Eddy of Eddy-kite fame lifted cameras to take photographs of cities and landscapes. Today KAP is the hobby of many enthusiasts, is a tool for surveying land and animals, and a mode for artistic expression. Professor Charles Benton illustrates how KAP can grow in one's life. Scott Haefner has one of the most extensive collection of KAP photographs; he shares his technology. San Francisco. Those who do KAP are called kapers KAP.

Long-distance travel across land, ice, and sea started centuries ago, but today significant tasks of moving people and goods from point A to point B are occurring; this is so in great part from the advances in kites and kite systems designs and technology, better understanding of winds, and use of computers and GPS. In 1889 kite sailing was carefully instructed via controlling large kite systems towing boats: Aerial Apparatus

Free-flight cross-country hang gliding kites both in the hang glider style and the paraglider style are permitting trips of hundreds of miles; records are recorded by the FAI. George Pocock (inventor) was an early pioneer in kites for transportation. NASA continues to explore free-flying kites for delivering goods to earth surface and non-earth planet surfaces, including Mars. There are several projects for using very large kites to sail cargo ships currently underway: KiteSail and KiteShip along with a series of patents and improvements in control of large ship-carried kite systems aim to save significant amounts of fuel.

Anne Quemere has crossed the Atlantic Ocean solo using power kites. And on 4 November 2008, she started her bid to cross the Pacific Ocean under power kites as sailing power to pull her in her small boat called Oceankite.

The German company SkySails has developed ship-pulling kites as a supplemental power source for cargo ships, first tested in January 2008 on the ship MS Beluga Skysails. Trials on this 55 m ship have shown that, in favorable winds, the kite increases fuel-efficiency by up to 30%. This system is planned to be in full commercial production late 2008. Kites are also available as an auxiliary sail or emergency spinnaker for sailing boats. Self-launching Parafoil kites are attached to the mast.

MS Beluga Skysails is the world's first commercial container cargo ship which is partially powered by a giant computer-controlled kite (160 m². or 1,722 sq ft.). The kite could reduce fuel consumption by 20%. It was launched 17 December 2007 and is set to leave the northern German port of Bremerhaven to Guanta, Venezuela at 1700 local time (1600 GMT), 22 January 2008. Stephan Wrage, managing director of SkySails GmbH announced: "During the next few months we will finally be able to prove that our technology works in practice and significantly reduces fuel consumption and emissions." Verena Frank, project manager at Beluga Shipping GmbH, SkySails GmbH's partner further stated that "the project's core concept was using wind energy as auxiliary propulsion power and using wind as a free of charge energy".

Using kites to reduce the work done by an engine in propelling a cargo ship is an idea that is gaining traction as a result of increasing fuel prices and environmental concerns. For example, SkySails GmbH have developed technology that they estimate can reduce fuel usage by 10–35% per day on average. A trial on board the MS Beluga resulted in fuel savings estimated to be worth £800 per day. This particular technology earned the company a sustainable shipping award for "Environmental Technology of the Year" in 2011.

The idea of using wind power for ships is, of course, nothing new. However, using large kites has several significant advantages over traditional sails:

Kites have been proposed for use in logging, to lift logs out of areas without roads.

Kites can also be used as light-effect carrier, e.g., by carrying light-sticks or battery-powered light effects. Promotional kites: Companies buy large quantities of kites that feature their advertisement. Messages are sometimes displayed by lighting systems that are built into the kite system.

Many kite stores fly kites regularly so that people will see the kites; one of the final purposes is for the store to profit from the flying of the kites. Kites are necessary to increase sales of kites.

Peter Powell's development and promotion of two-line stunt kites or sport kites help to move stunt kiting into a popular activity as well as a competitive sport. Also, the parafoil stunt kites feed the same sporting activity. Events for kites of more than two control lines are common. The four-line Revolution kite has been setting new standards in precision flying. Informal field competition and formal sport competition support a stunt-kite industry; seemingly endless refinements to the kite wing and kite line along with accessories continue unabated.

Frequently kites are used to entertain observers Some kiters get entertain themselves, but others enjoy entertaining the public or members of an organized gathering. This sector of application is part of recreational uses, but sometimes part of commercial uses.

Kites stilled are hung decoratively in rooms of homes and businesses to set the tone of a home or selling environment.

There are several ways kites are used in recreational and sport fishing. Lofting drop lines is one, but things don't stop there. Net-spreading underwater kites, soil kites (kiting anchors), kiting bait, control-kite trolling of bait, recreational kiting during fishing sessions, aerial photography of fishing environment using kites, and out and back cycles of trolling bait using a kite. Recreational fishing, commercial fishing, and scientific and military uses of depressors of tow lines use water kiting to accomplish the effects wanted. The Use of Kites for Fishing—George Webster wrote comprehensively on kite fishing. Jetty/Pier Fishing.; _ Paravanes for Sportfishing. A plan view of a Solomon islander's leaf fishing kite is shown in a photograph held by the Pitt-Rivers Museum is viewable at Natural History Magazine online; Pick from the Past, Natural History, April 1957: "Go Fly a Kite".

Kites have been used for military uses in the past for signaling, for delivery of munitions, for free-flight kiting payloads from aircraft to ground positions, for kiting troops to points where they could parachute to destinations, for underwater kiting via paravanes to perform various underwater duties, for lifting payloads from one point to another, for raising rescue signals from rafts or stressed areas, for raising communications antenna, and for observation by lifting an observer above the field of battle, and by using kite aerial photography. Barrage kites have been used in both open frame kites and kytoon types to defend against enemy aircraft.

Kim Yu-Sin (or Kim Yushin), a Korean general, in 637 C.E. rallied his troops to defeat rebels by kite lofting a burning ball. Kites were also used by Admiral Yi of the Joseon (1392–1910) Dynasty of Korea. During the Japanese invasions of Korea (1592–1598), Admiral Yi commanded his navy with kites. His kites had specific markings directing his fleet to perform his order. Admiral Yi was said to have over 300 such kites. The war eventually resulted in a Chinese and Korean victory; the kites played a minor role in the war's conclusion.

In more modern times the British navy also used kites to haul human lookouts high into the air to see over the horizon and possibly the enemy ships, for example with the kite developed by Samuel Franklin Cody. Barrage kites were used to protect shipping during the Second World War. Kites and kytoons were used for lofting communications antenna. Submarines lofted observers in rotary kites. The Rogallo parawing kite and the Jalbert parafoil kite were used for governable parachutes (free-flying kites) to deliver troops and supplies.

Kites have been used for scientific purposes, such as Benjamin Franklin's famous experiment proving that lightning is electricity. Kites were the precursors to aircraft, and were instrumental in the development of early flying craft. Alexander Graham Bell experimented with very large man-lifting kites, as did the Wright brothers and Lawrence Hargrave. Kites had an historical role in lifting scientific instruments to measure atmospheric conditions for weather forecasting. Francis Ronalds and William Radcliffe Birt described a very stable kite at Kew Observatory as early as 1847 that was trialled for the purpose of supporting self-registering meteorological instruments at height.

Collecting kited spiders with kited nets: Kites are used to take samples of upper air and to collect things found in the upper air. The spiders that kite to disperse (so-called ballooning spiders) have been found in nets raised to upper air for collecting; the method is noted carefully in Spider Ballooning: Development and Evaluation of Field Trapping Methods (Araneae) Balloon kite of the so-called ballooning spiderlings; the spiders' kite is not a balloon.

Kites were the precursors to aircraft, and were instrumental in the development of early flying craft. Alexander Graham Bell experimented with very large man-lifting kites, as did the Wright brothers and Lawrence Hargrave.

Conductor carried up by a kite in the sky can lead to a high voltage shock, which can endanger people and equipment.

A major research and development project called Makani Power, based in California and funded by Google.org, is investigating the use of kites in harnessing high altitude wind currents to generate electricity.

Kites can be used for radio purposes, by kites carrying antennas for MF, LF or VLF-transmitters. This method was used for the reception station of the first transatlantic transmission by Marconi. Captive balloons may be more convenient for such experiments, because kite carried antennas require a lot of wind, which may be not always possible with heavy equipment and a ground conductor. It must be taken into account during experiments, that a conductor carried by a kite can lead to a high voltage toward ground, which can endanger people and equipment, if suitable precautions (grounding through resistors or a parallel resonant-circuit tuned to transmission frequency) are not taken.

Kites can be used to carry light effects such as lightsticks or battery powered lights. 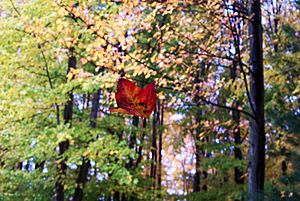 There are natural kites that play a part in shaping what happens on earth. Some leaves kite to relieve wind pressures, pump fluids, and to disconnect annually to fertilize the soils. Poet Pablo Rosenblueth expressed his understanding that children see leaves as kites. Poet Marvin Bell recognized leaves are kites in his Nightworks: Poems 1962–2000. The leaf wafts in the wind held by the tethered leaf stem; when it is fall time, the leaf stem has a de-mooring disconnect process; the wind then easily interacts with the leaf to cause it to fly off the trees and into a gliding fall to the ground. There is a following of kite makers that bridle leaves to fly them again as kites.

Billions of spiders use kiting to travel, disperse or to build bridge lines for their webs. Spiders hanging in the moving air on their silks are deflected to various points where they make anchor points for web building. Carol Frost, biology researcher of the University of Alberta, Canada, observed kiting in spiderlings.

All content from Kiddle encyclopedia articles (including the article images and facts) can be freely used under Attribution-ShareAlike license, unless stated otherwise. Cite this article:
Kite applications Facts for Kids. Kiddle Encyclopedia.