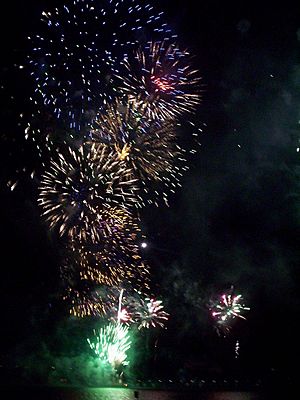 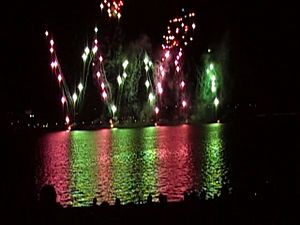 Skyfire is an annual March fireworks show held over Lake Burley Griffin in Canberra, Australia since 1989. The event is funded by local radio station FM 104.7, and the display is synchronised to a soundtrack of music broadcast on the station.

History of the event

On 10 March 1991, Skyfire III saw more than 2.5 tonnes of fireworks launched into the sky for Canberra's viewing pleasure. In 1992, Skyfire was held on 8 March. It featured three tonnes of pyrotechnics and lasted for 35 minutes.

Skyfire Mark V, on 7 March 1993, featured 436 separate shots, coordinated to music by artists including Madonna, Midnight Oil and Prince. The show used more than five tonnes of fireworks, launched from 10 pontoons floating in the middle of the lake. In 1994, Skyfire was held on 13 March and featured six tonnes of aerial and water fireworks worth almost $250,000.

The 2006 Skyfire was held on 4 March, and called "Skyfire 18" because it was the eighteenth year of the fireworks. The day has become a large event with other activities including a display by the Roulettes aerobatic squadron and a performance by Lee Harding. There were around 35,000 individual fireworks used, with approximately 6,000 shooting comets and almost 3,000 shells. More than 170,000 visitors turned out to see Skyfire 19 in 2007.

Skyfire 21 was held on 21 March 2009, with fireworks commencing at 8.33pm and lasting for 21 minutes. The firing zone was down the center basin of Lake Burley Griffin up to Anzac Parade and Parliament House down to Regatta Point. Fortunato Foti and a band of pyrotechnicians from Foti International Fireworks provided the show which was "at least 30 per cent bigger than the previous years," with "over 3,000 aerial fireworks, 15 to 20,000 shooting comets". One barge shot off a few more fireworks for 5–10 minutes after the show completed.

On 19 March 2011 around 80,000 people attended Skyfire. That year over 30 youths were taken into custody by police for underage drinking at the event. The following year, 130 police were employed to patrol Skyfire, and youth reception stations were set up at the event. The 2012 event featured more than 2500 aerial fireworks.

Skyfire 25 in 2013 featured displays by the Royal Australian Navy, the Federation Guard and the Snowy Hydro Rescue Helicopter.

Skyfire in 2014 utilised around 3000 individual cues and approximately eight kilometres of cabling.

Skyfire was canceled in 2020 and 2021 due to the coronavirus pandemic.

Attendance and pyrotechnics by year

Skyfire is a FM 104.7 event, with sponsorship over the years also offered by Casino Canberra, ActewAGL, and Canberra Airport.

All content from Kiddle encyclopedia articles (including the article images and facts) can be freely used under Attribution-ShareAlike license, unless stated otherwise. Cite this article:
Skyfire (Canberra) Facts for Kids. Kiddle Encyclopedia.