Kids Encyclopedia Facts
This page is about the card game. For the children's game, see Red hands. For the personal weapon, see Slapjack (weapon). For the professional wrestler, see Shane Thorne.

Slapjack, also known as Slaps, is a simple standard-deck card game, generally played among children. It can often be a child's first introduction to playing cards. The game is a cross between Beggar-My-Neighbour and Egyptian Ratscrew and is also sometimes known as Heart Attack. It is also related to the simpler 'slap' card games often called Snap.

A 52-card deck is divided into face-down stacks as equally as possible between all players. One player removes the top card of their stack and places it face-up on the playing surface within reach of all players. The players take turns doing this in a clockwise manner until a jack is placed on the pile. At this point, any and all players may attempt to slap the pile with the hand they didn't use to place the card; whoever covers the stack with his or her hand first takes the pile, shuffles it, and adds it to the bottom of their stack. If another player puts their card over the jack before it is slapped, the jack and the cards underneath can't be taken by a player until the next jack is revealed. When a player has run out of cards, they have one more chance to slap a jack and get back in the game, but if they fail, they are out. Gameplay continues with hands of this sort until one player has acquired all of the cards.

In a popular variation with a regular deck, the person covering the cards must simultaneously say "Slapjack!" If the person fails to say this, they do not get the pile. Additionally, if the player covers the pile and says "Slapjack", and the card is not a jack, then the other players get to divide the pile evenly among themselves. 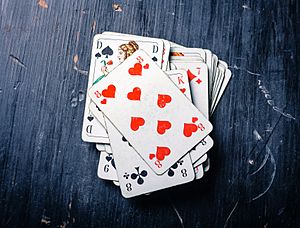 Two eights dealt in a row is a "snap"

Snap is a popular children's card game where cards are dealt out and the object is to react first when a pair of same-value cards are revealed. Gameplay is related to Egyptian Ratscrew. The game is often one of the first card games to be taught to children and is often played with special packs of cards featuring popular children's characters from television programmes or recent films. For older children, more complex packs exist, where the differences between cards are more subtle and penalties exist for falsely calling Snap.

The pack of cards is dealt out among the players in face-down stacks as equally as possible. Play proceeds with the players taking it in turns to remove a card from the top of their stack and place it face-up on a pile in front of them. If two cards on the tops of any of these piles are ever identical (or, if a conventional pack of cards is used, are of the same number), the first player to shout "Snap!" takes both face-up piles and adds them to the bottom of their own stack. The player who accumulates all the cards wins.

In a variation, better suited to younger children, cards are played onto a single shared stack, and players call "snap!" if two consecutive cards on this pile are identical.

This variation is played with a traditional deck of cards and complications are added as to appeal to a slightly older demographic.

A standard 54 (including jokers) deck of cards is dealt face down to the players. Simultaneously, all players turn over their top card. If any two cards show the same number, OR a joker is played by any player, the first player to cry out (traditionally the word 'snap' but any cry will do) receives all of the cards played. If none is played, players turn over the next card in their deck. When a player runs out of cards, they have until the end of the trick AND the next trick to attempt to win themselves cards. After this they are eliminated. Eliminated players act as judges as to who cries out first. The player with all of the cards at the end wins.

Irish Snap is a card game whose objective is to lose cards as quickly as possible. Since there is only one loser, forfeits can be made for the person with all the cards at the end of the game.

A deck of card is dealt out to the players, face down. They take turns to play cards face-up to a centre pile, calling out card ranks as they do so: the first player calls "Ace", the second "two", and so on. If the card you play matches the card you have called, the pile can be slapped as in Slapjack, with the last person to slap taking the pile as a penalty. The last player to have any cards left is the loser.

An extra, optional, rule of Irish snap is that anything said, including the card number and snap must be done so in an Irish accent.

If a player snaps incorrectly when there is not actually any kind of matching pair, they receive all of the cards. However, in order for this to come into effect the player must touch the deck in the middle. If they simply shout snap, or motion towards it, the game carries on as normal.

The game can also be continued so that even players who have lost all their cards still take part in the game. They will still say the next number after the previous person whilst not putting down a card. For example if person B has lost all their cards and player A puts down a 7 whilst saying the number 6, as soon as player B says 7 everyone slams for the pile. It is common for the person to dummy, in which case if he has not said the number the person who touches the pile incorrectly will pick up the pile.

The "Extreme" variant of Irish Snap is also referred to as 'Ultimate Snap', or simply 'Irish Snap'. It is based on the alternative rules of Irish Snap in addition to any other house rules the players consent to. It bears some similarity to Egyptian Ratscrew. Commonly accepted rules include:

Irish Snap
If the card rank presently laid matches the rank being spoken by the layer, all players snap.
Conventional Snap
If the card laid is identical in rank to the one beneath it, all players snap.
Silent Sevens
If a seven (or another rank of card agreed upon by all players) is laid, the ranks are no longer counted out loud and players must keep track of them in their head. This may continue until the same card is laid again and nullifies the rule.
Runs
Players snap a set of cards which increase or decrease by one rank every card. For example: 5,6,7 or 8,7,6.
Sandwiches
Players snap two matching cards with any card in between them, such as 5,7,5 or Jack,3,Jack.
King Salutes
Players must salute before making a snap which will land on a king
Preemptive Snap
When a player runs out of cards, he continues to play, just as in the alternative Irish Snap rules. However, any potential snaps this causes may be snapped before he has said the relevant card rank. This is particularly interesting when neighboring players run out of cards simultaneously.

Technically there is no end to the list of rules that can be added to a game of Irish snap, and some variations state that any player who snaps fastest twice in a row may add another rule. Some games include the rule that any player who runs out of cards and snaps fastest is declared the winner, whereas other versions of the game simply go on until players choose to leave.

All content from Kiddle encyclopedia articles (including the article images and facts) can be freely used under Attribution-ShareAlike license, unless stated otherwise. Cite this article:
Slapjack Facts for Kids. Kiddle Encyclopedia.