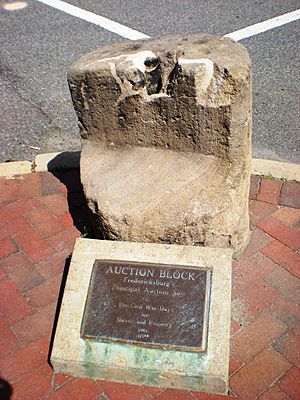 The Slave Auction Block in Fredericksburg, Virginia is a large stone that was used as an auction block in historical slave auctions. It was located on the corner of William Street and Charles Street, and is listed on the National Register of Historic Places as part of the Fredericksburg Historic District.

After almost a century of debate as to whether or not it should be removed as a symbol of racial oppression, the auction block was removed from its site on June 5, 2020, following protests triggered by the killing of George Floyd. The city council had been planning the block's removal since 2017, with a court victory by the council in February 2020 having cleared the last remaining legal obstacles to moving it. The block is planned to be displayed at the Fredericksburg Area Museum.

All content from Kiddle encyclopedia articles (including the article images and facts) can be freely used under Attribution-ShareAlike license, unless stated otherwise. Cite this article:
Slave Auction Block, Fredericksburg Facts for Kids. Kiddle Encyclopedia.