Eurema nicippe, the sleepy orange, is a North American butterfly in the family Pieridae. It is also found in the West Indies, Costa Rica and Belize. 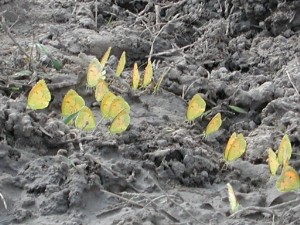 Sleepy oranges puddling on damp ground.
For a key to the terms used, see Glossary of entomology terms.

The sleepy orange is a bright orange butterfly with the upperside of the wings having wide black borders. The forewing coastal margin has a small, narrow black spot. Some people think that the sleepy orange got its name from the black spot that looks like a closed eye; others say that the sleepy orange is a misnomer because, when disturbed, the butterfly has a very rapid flight. The underside of the wings varies seasonally: summer forms are bright yellow with brick-red markings, while winter forms are browner and more heavily marked. It has a wingspan of 13⁄8–21⁄4 inches (35–57 mm).

The sleepy orange may be found in or around old fields, roadsides, woods edges, swamps, wet meadows, open woodlands, margins of ponds, waterways, and valleys.

The eggs are pale greenish yellow and turn red just before hatching. They are laid on the underside of the host plant leaves, or sometimes on flowers. The larva is fuzzy and grayish green, with a whitish-yellow side stripe. The chrysalis varies from green to brownish black. Adult sleepy oranges migrate south to spend the winter. They have two to four broods per year.

All content from Kiddle encyclopedia articles (including the article images and facts) can be freely used under Attribution-ShareAlike license, unless stated otherwise. Cite this article:
Sleepy orange Facts for Kids. Kiddle Encyclopedia.