The smooth toadlet (Uperoleia laevigata) is a species of Australian ground-dwelling frog native to the coast and west of the ranges of south-east Queensland, all of eastern New South Wales and north-eastern Victoria.

The smooth toadlet reaches 35mm in length. It is grey-brown to olive-brown above often with darker spots and blotches. There is normally a pale triangular patch on the head in front of the eyes and a pale yellow patch in the armpit. It has prominent parotoid glands. Its belly is white and there is a red patch in the thighs.

This frog is associated with dry forest, sclerophyll forest and cleared grassland/farmland along the coast, slopes and ranges. Males make a drawn out "arrrrk" call from around the breeding site, this can be anything from a large permanent dam to a flooded ditch or grassland. Calling males can be right at the waters edge to up to 20 metres away. Calling occurs from spring to autumn. After heavy rain many of these frogs may breed in one or two weeks, when in drier times the breeding site may appear absent of this species. 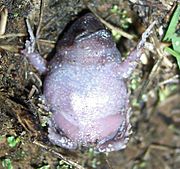 The white ventral surface of the smooth toadlet 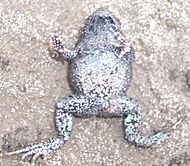 The flecked ventral surface of the dusky toadlet

The smooth toadlet has a white belly, occasionally with a few spots of black, while the dusky toadlets belly is white with many dark spots and flecks, almost covering the entire ventral surface, the Tyler's toadlet has a fully pigmented underbelly of dark blue/black colour. Male smooth toadlets may have a dark throat, however the belly will still be white. 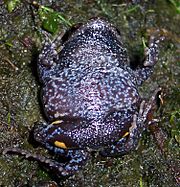 The dark ventral surface of the Tyler's toadlet

Each of these species has a different but similar call the dusky toadlet has a short "arrk", the smooth toadlet has a slightly longer and deeper "arrrk", while the Tyler's toadlet has the deepest and most elongated "arrrrk".

All content from Kiddle encyclopedia articles (including the article images and facts) can be freely used under Attribution-ShareAlike license, unless stated otherwise. Cite this article:
Smooth toadlet Facts for Kids. Kiddle Encyclopedia.