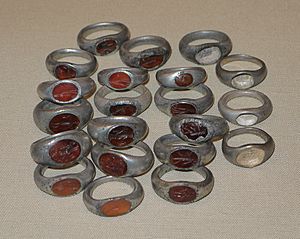 The Snettisham Jeweller's Hoard is a collection of Romano-British jewellery and raw materials, found during the construction of a house in the Norfolk village of Snettisham in 1985. The hoard is thought to be the working stock of a jeweller, buried in a single clay pot around 155 AD. The finds include the working tip of a quartz burnishing tool (its handle has not survived), partially or fully completed items of jewellery, and raw materials: mainly silver coins, scrap silver items and silver ingots, but also six pieces of scrap gold, and many engraved gemstones to be set in rings. The presence of scrap gold and silver and absence of base metals indicates that the jeweller dealt mainly with high-status customers.

The 17.5 centimetres (6.9 in) high pot in which the hoard was found is local grey-ware, spherical with relatively narrow opening and base, with a capacity of around 1.6 litres (0.35 imp gal; 0.42 US gal). Some items – such as bracelets – had to be bent to fit through the opening. Within the pot were found:

The silver finds were covered in a layer of silver chloride corrosion, and some items including copper were covered with green copper carbonate verdigris.

The finds are held by the British Museum.

All content from Kiddle encyclopedia articles (including the article images and facts) can be freely used under Attribution-ShareAlike license, unless stated otherwise. Cite this article:
Snettisham Jeweller's Hoard Facts for Kids. Kiddle Encyclopedia.