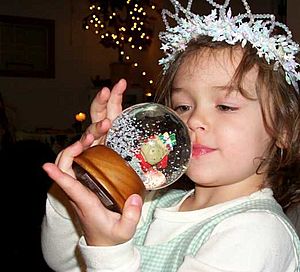 A girl holding a snowglobe

A snow globe (also called a waterglobe, snowstorm, or snowdome) is a transparent sphere, traditionally made of glass, enclosing a miniaturized scene of some sort, often together with a model of a town, landscape or figure. The sphere also encloses the water in the globe; the water serves as the medium through which the "snow" falls. To activate the snow, the globe is shaken to churn up the white particles. The globe is then placed back in its position and the flakes fall down slowly through the water. Snow globes sometimes have a built-in music box that plays a song. Some snow globes have a design around the outerbase for decoration. Snow globes are often used as a collectible item.

At the end of the 19th century the Austrian Erwin Perzy, a producer of surgical instruments, invented the so-called Schneekugel (snow globe) and got the first patent for it. Originally his goal was to develop an extra bright lightsource for use as a surgical lamp. As he tried to intensify the candlepower of a so-called Schusterkugel (a water filled flask used to focus light since the Middle Ages) with particles made out of different materials for reflection purpose, the effect reminded him of snowfall and it's said that by this he got the idea for a snow globe. He then built his first actual globe with the basilica of Mariazell as a model in it. Because of the great request for his snow globes, Perzy, along with his brother Ludwig opened a shop in Vienna, where the production continues until today as a family business. Today the globes get exported throughout the world; the material out of which the "snow" is made is handed down from generation to generation as a production secret (it should float as long as possible in the water before sinking down).

In the United States, the first snow globe-related patent was granted in 1927 to Joseph Garaja of Pittsburgh, Pennsylvania. In 1929, Garaja convinced Novelty Pool Ornaments to manufacture a fish version underwater. 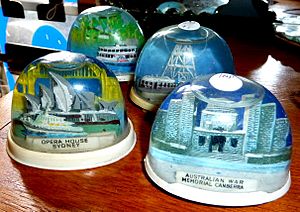 In the 1950s, the globes, which were previously made of glass, became available in plastic. Currently, there are many different types of snow globes available. These globes are produced by a number of countries and range from the mass-produced versions of Hong Kong and China to the finely crafted types still produced in Austria. Snow globes feature diverse scenes, ranging from the typical holiday souvenirs to more eclectic collectibles featuring Christmas scenes, Disney characters, popular icons, animals, military figures, historical scenes, etc.

Since 2000 fashion and luxury brands, such as Louis Vuitton, Ladurée, Sonia Rykiel, or Martin Margiela, got hold of the trend and grew fond of snow globes as collectible totems and emblems of their brand image. Such enthusiasm was reinforced by presence in numerous art collections of contemporary artists Walter Martin & Paloma Muñoz (also known as Martin & Muñoz) who use snow globes as a medium, or museums who paid tribute to famous artists such as French sculptor Auguste Rodin in creating high quality numbered glass dome snow globes.

Initially snow globes consisted of a heavy lead glass dome which was placed over a ceramic figure or tableau on a black cast ceramic base, filled with water and then sealed. The snow or "flitter" was created by use of bone chips or pieces of porcelain, sand or even sawdust. As they became more sophisticated, the glass became thinner, the bases were lighter (Bakelite was popular during the Art Deco period) and the snow was made out of particles of gold foil or non-soluble soap flakes. For health and safety reasons, white plastic has become more common in the construction of modern snow globes. The liquid has evolved from initially light oil to a mixture of water, antifreeze (ethylene glycol), and glycerol. An added benefit was that glycerol slowed the descent of the snow. Caution should be taken if a snow globe is broken because the liquid, which can contain antifreeze, can be deadly to cats and dogs if ingested or licked off their fur.

Today's snow globes can include music boxes, moving parts, internal lights, and even electric motors that make the "snow" move so that it is no longer necessary to shake the globe. Some also have central slots for positioning items such as photographs.

In 2005, many U.S. stores started to sell inflatable snow globes as part of their Christmas décor. These have a base with a blower, forcing air which carries polystyrene pellets from the bottom and through a tube up the back to the top, where they are blown out and fall down inside the front, which is made of transparent vinyl. The rest of the globe, including the characters inside, are made of colorful nylon fabric. These globes are typically large decorations for the front yard, and are lighted internally with a few C7 (nightlight-type) incandescent light bulbs (which are enclosed in plastic spheres to prevent heat damage to the fabric).

A variation on this is the "tornado globe", where small foam objects spin around inside a globe. This is more common for Halloween, where foam bats or sometimes ghosts may fly around the Halloween figures in the middle. These were most common in 2006, and come in both large inflatables, and smaller tabletop versions with rigid plastic globes about 8 to 12 inches or 20 to 30 centimeters in diameter. As with the snow globes, static cling often causes the foam to stick to the plastic (especially vinyl) when humidity is low, while condensation will do the same thing on outdoor inflatables when humidity is high, or rainwater has seeped in while it is deflated.

All content from Kiddle encyclopedia articles (including the article images and facts) can be freely used under Attribution-ShareAlike license, unless stated otherwise. Cite this article:
Snow globe Facts for Kids. Kiddle Encyclopedia.