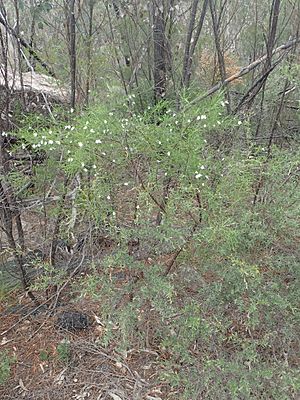 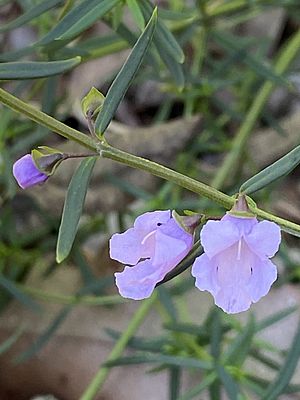 Prostanthera nivea, commonly known as snowy mint-bush, is a species of flowering plant in the family Lamiaceae and is endemic to eastern Australia. It is a shrub with linear to cylindrical leaves and white flowers arranged in leaf axils near the ends of branchlets and is one of the mint-bushes that is not aromatic.

Prostanthera nivea was first formally described in 1834 by George Bentham from an unpublished description by Alan Cunningham. Bentham's description was published in his book Labiatarum Genera et Species.

Bentham described two varieties and the names are accepted by the Australian Plant Census:

Snowy mint-bush grows in forest, woodland and heath in south-eastern Queensland, eastern New South Wales and Victoria. Subspecies induta grows in rocky crevices or on ledges in the Warrumbungles with a single collection from the Pilliga forest.

All content from Kiddle encyclopedia articles (including the article images and facts) can be freely used under Attribution-ShareAlike license, unless stated otherwise. Cite this article:
Snowy mint-bush Facts for Kids. Kiddle Encyclopedia.