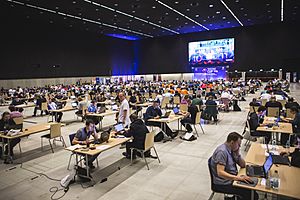 Software testing takes place during software engineering. It is done before the release to the final audience.

Software testing is meant to see how the software works under different conditions. These conditions might be different depending on what the audience is. Testing is done to understand if it will work correctly, partially fail to work properly, or totally fail to work properly. Each test may be used to see how one, or many, parts of the software work at a point in its development.

Proper performance may be based on specific (written) requirements or standards (which might, for example, be usability). Bad performance, or poor quality, might cause an unhappy audience. This could cause more work needing to be done on the software and higher costs.

For larger software systems, tracking may take place checking completeness of the set of tests, test results, and how quickly any problems are fixed. All this information can be used for decision making about how ready the software is, and when it could be released to the final audience.

All content from Kiddle encyclopedia articles (including the article images and facts) can be freely used under Attribution-ShareAlike license, unless stated otherwise. Cite this article:
Software testing Facts for Kids. Kiddle Encyclopedia.