Solares Hill is the highest point of land on the island of Key West in the lower Florida Keys in Monroe County, Florida. 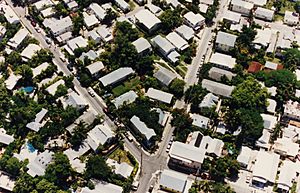 The summit of the hill is near Key West Cemetery in the section of the island called Old Town, Key West, at and around where Elizabeth Street, Angela Street, and Windsor Lane intersect.

Solares Hill is also the name of a former weekly newspaper, founded in 1971 and independent until 1998, when it was bought by The Key West Citizen, the only local daily newspaper. It is now published as a section of the newspaper's Sunday edition.

All content from Kiddle encyclopedia articles (including the article images and facts) can be freely used under Attribution-ShareAlike license, unless stated otherwise. Cite this article:
Solares Hill Facts for Kids. Kiddle Encyclopedia.