After the Great War, university alumni raised $397,141 to erect the tower as a war memorial. The cornerstone was laid in 1919 by Victor Cavendish, 9th Duke of Devonshire, the 11th Governor General of Canada. Construction was completed in 1924 at a cost of $252,500, with the surplus funds endowed for scholarships in perpetuity. The names of those lost in the Great War (1914–18) are etched on a sheltered stone screen adjacent to the tower's base, while the inner walls of the tower's stone archway are inscribed with the names of those lost in the Second World War (1939–45).

In 1927, the clock was installed and the carillon was dedicated with its first 23 bells. Both were purchased by the alumni association from the famous British firm Gillett & Johnston, which also cast the bells atop the Peace Tower on Parliament Hill. An additional 19 bells were added in 1952 to commemorate World War II, but were replaced in 1976 and more bells added. The carillon was rededicated that year at its present size with the addition of these 28 bells from Petit & Fritsen. In that same operation the transposition of this carillon was unfortunately raised: whereas the instrument at first transposed down a major second, its 51 bells now speak at concert pitch. The bells of Soldiers' Tower Carillon range in weight from 23 pounds to the bourdon's 4 tons, and are performed on special occasions such as convocation, reunions, homecoming and Remembrance Day in addition to regular recitals attended by university members and the general public. Remembrance Day Ceremonies at the University of Toronto are held yearly, on or about the 11th of November, with representatives from many Canadian institutions laying wreaths at the foot of the Soldier's Tower in honour of alumni who, as soldiers, made the ultimate sacrifice during WWI and WWII. 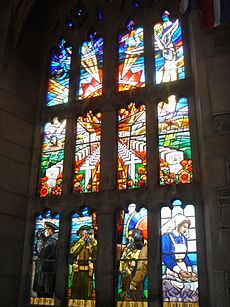 One of the stained glass windows at the tower

The tower features a dramatic 12-panel stained-glass window that is partly a visual interpretation of John McCrae's "In Flanders Fields", along with 8 smaller stained-glass windows that depict men and women of the armed forces at wartime. This memorial is dedicated to members of the University of Toronto who served in the First and Second World Wars. A museum within the tower showcases a collection of medals, memorial books, portraits, photographs, flags and miscellaneous memorabilia from the period. A memorial stained glass window is dedicated to three University College students (Malcolm Mackenzie, I.H. Mewburn, and William Tempest) killed in the Fenian Raids. High on the wall of the Memorial Room there is a memorial carved in stone for each of the Carillon of 51 bells (iron plus playing console) which memorialize individuals at the University of Toronto who lost their lives in World War I. 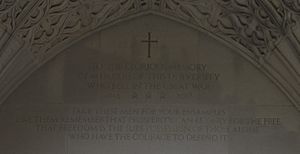 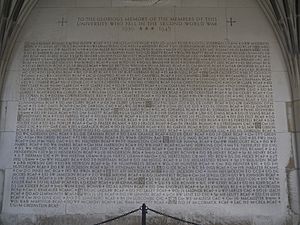 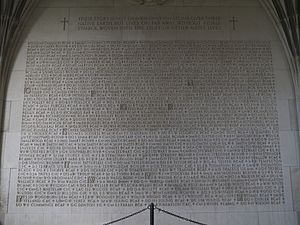 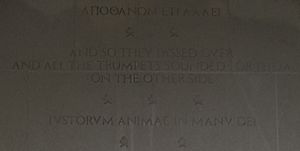 The First World War inscription on the memorial panels of Soldiers' Tower is:

Take these men for your ensamples
like them remember that prosperity can be only for the free
that freedom is the sure possession of those alone
who have the courage to defend it.

The Second World War inscription on the memorial panels is:

Their story is not graven only in stone over their
native earth, but lives on far away, without visible
symbol, woven into the stuff of other men's lives.

And so they passed over
and all the trumpets sounded for them
on the other side.

Reproduced is the poem: In Flanders Field. Among the list of the dead in WWI is the author John McCrae.

All content from Kiddle encyclopedia articles (including the article images and facts) can be freely used under Attribution-ShareAlike license, unless stated otherwise. Cite this article:
Soldiers' Tower Facts for Kids. Kiddle Encyclopedia.