Kids Encyclopedia Facts
This page is about the park in Cardiff. For the cricket stadium located there, see Sophia Gardens (cricket ground). 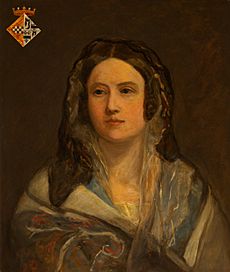 Sophia Crichton-Stuart, Marchioness of Bute, after whom the park is named

The park is located close to Cardiff city centre and is adjacent to Bute Park and Pontcanna Fields, forming part of the city's 'green lung'. Sophia Gardens is linked to Bute Park by the Millennium footbridge over the River Taff (1999). In addition to the Glamorgan County Cricket Ground, Sophia Gardens contains the Sport Wales National Centre, Brewhouse & Kitchen public house, an exhibition area and a car and coach park, and the former warden's house.

The park is named after Lady Sophia Rawdon-Hastings, daughter of the 1st Marquess of Hastings and wife to the 2nd Marquess of Bute. Lady Sophia was concerned to provide open space for recreation in the rapidly expanding town in the late 19th century, in which her husband was heavily involved. The gardens were laid out in 1854 on the site of Plasturton Farm by the architect Alexander Roos. They were opened to the public by Lady Sophia in 1858, to compensate for the closure of Cardiff Castle grounds. The park was extended northwards by 28 acres in about 1879. The park was acquired by Cardiff City Council, then the Cardiff Corporation, from the 5th Marquess of Bute in 1947.

In the late 19th and early 20th century the Cardiff Horse Show was held in the park. In 1891 the park was home to Buffalo Bill's Wild West Show during his tour of British provincial towns.

Sophia Gardens Pavilion was built in 1951 for the Festival of Britain, and was used as a concert venue until it collapsed under heavy snowfall in 1982.

Opening ball of the 2009 Ashes series

All content from Kiddle encyclopedia articles (including the article images and facts) can be freely used under Attribution-ShareAlike license, unless stated otherwise. Cite this article:
Sophia Gardens Facts for Kids. Kiddle Encyclopedia.