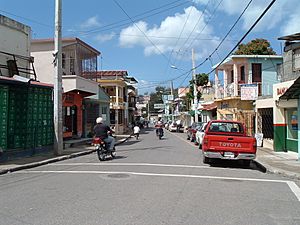 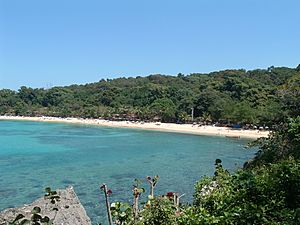 Sosúa is a Dominican municipality in the Puerto Plata province, on the north coast of the country.

Sosúa is a taíno name of the small river (Sosúa River) that crosses the city and ends in the Atlantic Ocean, on the western part of the Sosúa Bay.

Sosúa is along the Sosúa Bay, a small bay with two headlands: to the east is Punta Sosúa ("punta" is a Spanish word that means, in this case, a headland) that was named as Punta Seca ("Dry headland") by Columbus in his first visit to the island; and to the west is Punta Payne, in front of the Sosúa Beach.

The bay is divided in two smaller bays:

Seven hundred and fifty German and Austrian Jews refugees came to the Dominican Republic between 1940 and 1945 to live in Sosúa. Here they created a dairy and cheese factory named "Productos Sosúa" that is still working. When the World War II ended, some of this refugees went to live to United States but many of them stayed in Sosúa.

With the development of tourism in the mid 1980s in the country, Sosúa came to be one of the most important places for tourism in the northern coast.

The municipality of Sosúa has two municipal districts:

Even if agriculture and fishing were very important activities in the past, since the mid 1980s tourism has come to be most important economic activity, with several important hotels in the city and in places near Sosúa and Cabarete.

All content from Kiddle encyclopedia articles (including the article images and facts) can be freely used under Attribution-ShareAlike license, unless stated otherwise. Cite this article:
Sosúa Facts for Kids. Kiddle Encyclopedia.