The Puerto Plata Province is one of the northern provinces of the Dominican Republic. The province is a popular tourist attraction since the late 1990s because there are many fine beaches.

Its capital is the city of San Felipe de Puerto Plata.

The province is named after its capital city, Puerto Plata. When Christopher Columbus visited the northern coast of the Hispaniola island for the first time, on 11 January 1493, he saw a mountain with clouds on its top and he gave it the name of Monte de Plata ("Mountain of Silver"). The town that was founded on the foot of that mountain was called Puerto de Plata ("Port of Silver"); the name was changed later to just Puerto Plata.

In 1605, the towns of Puerto Plata along with Monte Cristi, Bayajá and La Yaguana were destroyed by the governor, Antonio de Osorio. All the people living in those towns had to move to places closer to the capital due to the amount of illegal trade happening in these towns. These towns formed what are now Monte Plata and Bayaguana.

It was created as a Maritime District (a special administrative category similar to a province and that has been abandoned) in 1865. It was part of the Santiago province before being elevated to the category of province. The 1907 Dominican Constitution changed its status to province with the municipalities of Puerto Plata, Altamira, Blanco and Bajabonico.

In 1978, Sosúa and Los Hidalgos were made municipalities of the province. In 1989, Villa Isabela became a municipality, Guananico in 1992 and Villa Montellano in 2006.

The Puerto Plata province is along the northern coast of the island. To the north, it has the Atlantic Ocean; to the east, the Espaillat province; to the south, the Santiago and Valverde provinces; and to the west, the Monte Cristi province.

Its population represents 3.4% of the total population of the country and the province is ranked as the 6th (out of 31 plus the National District) more populated province.

As of 2016[update], the total estimated propulation of the province is 329,482 inhabitants.

The largest city of the province is San Felipe de Puerto Plata, its head municipality or capital, with an urban population (in 2010) of 118,496 inhabitants.

Most of the population is composed of blacks and mulattoes.

Because the Cordillera Septentrional is close to the coast, rivers in this province are short. The most important rivers are Bajabonico, Yásica and Camú del Norte.

There are nine municipalities and 12 municipal districts (M.D.) in the province. 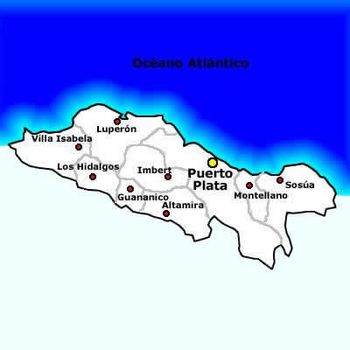 There are several important economic activities in the province, like tourism along the coast, farming and industry (like food products and rum).

All content from Kiddle encyclopedia articles (including the article images and facts) can be freely used under Attribution-ShareAlike license, unless stated otherwise. Cite this article:
Puerto Plata Province Facts for Kids. Kiddle Encyclopedia.