The South Boston Naval Annex, was a 167-acre (68 ha) United States Navy shipyard annex located in South Boston. It was the annex of the Boston Navy Yard, and was operational from the 1920 to 1974, when it was closed along with the main shipyard. The annex is also home to Dry Dock Number 3, one of the largest dry docks on the East Coast.

The Department of Defense purchased a large part of the Commonwealth Flats in 1920, and split up the land between the Naval Annex and the South Boston Army Base. At this time, the Navy began construction of buildings, which would continue up until World War II. Rail service to the annex was provided by Track 61.

At the South Boston Annex, work was started in March 1940 on a quay wall and wharf and on a machine shop 1,300 feet (400 m) long and 500 feet (150 m) wide. The following spring a new power plant project was undertaken, to provide six boilers, a compressor and a primary connection to the Edison system. An additional waterfront project, comprising two 980-foot (300 m) timber piers and a steel sheet pile bulkhead, was started in the summer of 1941, followed in September by construction of an additional shop 420 feet (130 m) long and 120 feet (37 m) wide.

In December 1941, work was started on a graving dock, 693 feet (211 m) long, 91 feet (28 m) wide at the entrance, and 32 feet (9.8 m) deep over the blocks, for the repair of cruisers. This dock, which was built inside a cellular steel pile cofferdam, was completed and placed in service in March 1943. The cofferdam was later incorporated as part of Piers 5 and 6.

Work was also undertaken in 1941 on a 500-man barracks for ship's crews, necessitated by the fact that with three-shift repair work, the crews could not be quartered aboard.

The expansion of the Annex continued with the construction of an additional 900-foot (270 m) pier, started in the fall of 1942, a rigger's shop, a paint shop, and a general shop, started in November of that year, and extensive improvements and additions to utilities, streets, tracks, and equipment.

After the war, the annex was used to store ships that were placed in reserve. In 1974, the Boston Navy Yard was closed, and the annex became the Boston Marine Industrial Park after the City of Boston purchased the land. 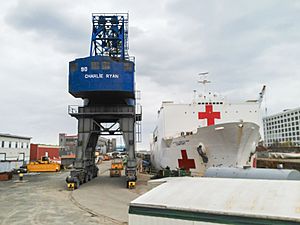 Today, the former yard is home to the various companies which have moved in over the years, having been integrated into the larger South Boston Waterfront. Sail Boston has also used the land to host ships when they are in port as well, along with the South Boston Army Base's land, which now operates as the Black Falcon Cruise Terminal under ownership of the Massachusetts Port Authority. Built in 1943, a Former Marine Machine Shop (Known then as "Building 53") now houses Harpoon Brewery, an auto shop, and John Nagle, a seafood distributor. Nagle utilizes the original building cranes and while Harpoon has one crane intact, it is stationary. However, the crane still has a plate indicating 53:4, denoting it as Building 53's 4th crane. When the MBTA's Red Line was extended in the early 80's, much of the dirt removed for tunnels ended up filling in the piers shown in the 1958 aerial photo.

On 7 August 1992 the Cunard luxury liner Queen Elizabeth 2 grounded on an uncharted rock in Vineyard Sound, south of Nashawena and Cuttyhunk Islands. The ship was repaired at Dry Dock Number 3, the only dry dock nearby capable of accommodating the QE2.

Many of the buildings and cranes of the Navy Annex still stand, with their numbers being maintained. Dry Dock Number 3 is used by the Boston Ship Repair company to repair ships – mostly those of the US Navy, United States Maritime Service and Military Sealift Command.

All content from Kiddle encyclopedia articles (including the article images and facts) can be freely used under Attribution-ShareAlike license, unless stated otherwise. Cite this article:
South Boston Naval Annex Facts for Kids. Kiddle Encyclopedia.