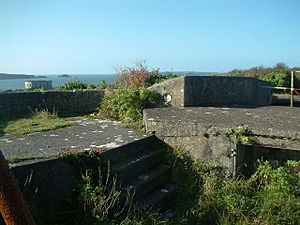 South Hook Fort, on the northern shore of Milford Haven, Pembrokeshire, is a Grade II*-listed building which belongs to a series of forts built as part of the inner line of defence of the Haven following the Royal Commission on the Defence of the United Kingdom.

Work commenced on the fort in 1859, a year before the Royal Commission was published. The fort later became part of the double defences of the Haven and was built to a similar design as that at Hubberstone. It is D-shaped with four walls 4 feet thick and contains a horseshoe shaped two-storey barracks block. It comprises two separate batteries protected by earthworks and connected to the fort by covered walkways. The fort initially housed twenty guns facing out to sea, although this was later modified. It is surrounded by a deep ditch, and access is via a bridge. Work was completed in 1865. Its complement included a Defence Electric Light searchlight unit manned by 200 men, and its guns were aligned to provide crossfire with those at Hubberston and Popton across the Haven. The fort was fully manned during the First World War, although it was abandoned in the 1930s. It was sold in 1936 but requisitioned in 1939 by the Admiralty and called HMS Skirmisher. During the Second World War, it was manned by WRENS controlling naval movements in the Haven. After the war it was once again decommissioned, and returned to private ownership. It now part of the South Hook LNG terminal jetty.

All content from Kiddle encyclopedia articles (including the article images and facts) can be freely used under Attribution-ShareAlike license, unless stated otherwise. Cite this article:
South Hook Fort Facts for Kids. Kiddle Encyclopedia.