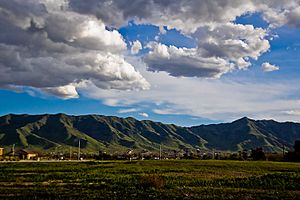 The South Mountains (O'odham: Muhaḍagĭ Doʼag, Yavapai: Wi:ki'tiyeda, Maricopa: Vii Kwxas), known locally as simply South Mountain, is a mountain range in central Arizona in south Phoenix, Arizona. It is on public land managed by the city of Phoenix as South Mountain Park.

Geologically, the South Mountains are thought to be a metamorphic core complex: evidence of movement of the North American tectonic plates from southwest to northeast and northeast to southwest, pushing up a series of mountain ranges including South Mountain. Other ridges with parallel orientation lie within the basin covered by basin fill sediments. The structural basin forms the current Phoenix metro area, which appears flat like a lake around mountains that rise over it like islands. The buried ridges are in the same orientation as the South Mountains, about one km high, and about one km apart from peak to peak, perhaps about 15 of them underneath the basin fill.

The mountain, along with the nearby Sierra Estrella, is considered sacred by the Akimel O'odham and the Kwevkepaya band of Yavapai.

The South Mountain Preserve is part of the Phoenix Parks System and is the second largest municipal park in the world. The preserve features recreational facilities such as ramadas, hiking and mountain biking trails, and equestrian facilities. The mountains overlook downtown Phoenix, AZ.

The major peaks of the South Mountains are (W to E):

Dobbins Lookout at the summit of South Mountain.

One of many petroglyphs in South Mountain Park

There are a variety of flora and fauna within the Salt River Mountains. One of the notable tree species here is the elephant tree, Bursera microphylla.

All content from Kiddle encyclopedia articles (including the article images and facts) can be freely used under Attribution-ShareAlike license, unless stated otherwise. Cite this article:
South Mountains (Arizona) Facts for Kids. Kiddle Encyclopedia.