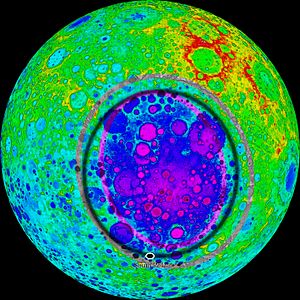 Topographical map of the South Pole-Aitken basin based on Kaguya data. Red represents high elevation, purple low elevation. The purple and red elliptical rings trace the inner and outer walls of the basin. (The black ring is an old artifact of the image.)

The South Pole–Aitken basin is a huge impact crater on the far side of Earth's Moon. Roughly 2,500 kilometres (1,600 mi) in diameter and 13 kilometres (8.1 mi) deep, it is one of the largest known impact craters in the Solar System. It is the largest, oldest and deepest basin on the Moon. The formation of the large lunar basins occurred before 3.8 billion years ago.

This moon basin was named after two features on opposing sides; the crater Aitken on the northern end and the southern lunar pole at the other end.

All content from Kiddle encyclopedia articles (including the article images and facts) can be freely used under Attribution-ShareAlike license, unless stated otherwise. Cite this article:
South Pole–Aitken basin Facts for Kids. Kiddle Encyclopedia.