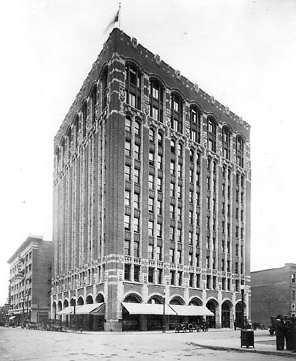 The Southam Building was one of two buildings at the intersection of 1st Street South West and 7th Avenue South West built contemporaneously by the Southam Company, the other being the Southam Chambers.

The site on which the Southam Building was located was originally home to the First Baptist Church. The original church was built in 1901 and was destroyed by fire in 1904. It was rebuilt soon after, this time in white brick. After the congregation outgrew the location, the property was sold to the Southam Company, who had bought the Calgary Daily Herald in 1908. The Montreal architectural firm Brown and Vallance was hired to design a new building for the site, which would serve as the offices for the newspaper. This firm also designed the Canada Life Assurance Building at 301 8th Avenue Southwest. Construction on the Southam commenced in June 1912; the building opened on 13 December 1913.

Built with terra cotta, tawny brick, and sandstone, the Southam was one of a select number of gothic revival buildings in Calgary. The British pottery makers Royal Doulton were commissioned to design eight gargoyles to adorn the west wall, each of which depicted a newspaper character. The gargoyles were named "The Architect," "The Other Architect," "The Editor," "The Sub-Editor," "The Steno," "The Cleaning Woman," "The Printer's Devil," and "The Typesetter." The gargoyles were saved when the building was demolished and today can be been on the walls of the Alberta Hotel. The Southam building was demolished in 1972.

The primary original tenant was the Herald, but offices were also occupied by dentists, physicians, and on the top floor, the radio station CFAC. Dentist Frank Sandercock practiced in the building during the 1920s and early 1930s. After the Herald moved to the Southam Chambers in 1933, the building was bought by Greyhound Bus Lines, who occupied the building until it was demolished.

All content from Kiddle encyclopedia articles (including the article images and facts) can be freely used under Attribution-ShareAlike license, unless stated otherwise. Cite this article:
Southam Building Facts for Kids. Kiddle Encyclopedia.