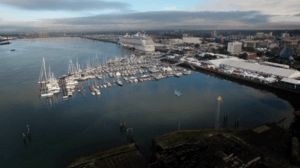 The Southampton Boat Show is an important sales platform for both national and international businesses, attracting over 110,000 visitors. The show attracts high net worth individuals from the UK and around the world, with an attendance sex ratio of 77% male, 23% female and an average age of 51 years. The average amount spent at each show is over £880 per head (excluding spending on boats).

Since 1997, the Boat Show has been a ten-day event, after the passing of the Southampton International Boat Show Act 1997. Past events have attracted a large number of visitors, with more than 123,000 attending the 2004 event. The 2005 event featured a makeshift beach, with tonnes of sand being imported to the event.

The exhibitors at the Boat Show cover every aspect of the leisure marine industry from boat builders, sail makers, chandlers and engine manufacturers to marine finance, clothing specialists, navigation equipment. There are thousands of boats, brands, products and suppliers for the ten day Show.

About The Show Organisers

British Marine is the trade association for the UK boating industry. Run by the industry, for the industry, the profits from both Shows are reinvested back into the UK leisure marine industry through the services and representation provided by British Marine. British Marine has over 1600 members, which account for a substantial amount of the industry's turnover and employ around 30,000 people. They are drawn from both the seagoing and inland sectors of the marine industry covering the leisure boat, hire fleet, commercial work boat and superyacht categories and supporting services.

All content from Kiddle encyclopedia articles (including the article images and facts) can be freely used under Attribution-ShareAlike license, unless stated otherwise. Cite this article:
Southampton Boat Show Facts for Kids. Kiddle Encyclopedia.