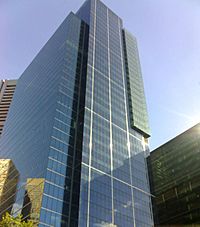 North side of SX1

Southern Cross Tower, also known as 121 Exhibition Street, is a 161-metre (530 ft) skyscraper in Melbourne, Victoria, Australia. The tower was built in 2004 and comprises 39 levels of office accommodation. The complex is a twin tower. The SX1 (or East tower) delivers 76,700 square meters of space over 39 floors. The SX2 (or West Tower) provides 45,200 square metres and 22 levels. The tower was once the location of Melbourne’s prestigious Southern Cross Hotel.

Before development of Southern Cross, the Victorian Government was concerned because its key departments were scattered among more than 15 office buildings throughout the Melbourne central business district. It decided to consolidate financially and allow the bureaucracy closer access to Spring Street, giving it access to the Parliament and Treasury. A consortium of private bodies, including Multiplex and Babcock & Brown, suggested a skyscraper in the location of the old and derelict Southern Cross Hotel. A key condition of the Victorian government's involvement in the project was its demand that the building be a state-of-the-art, environmentally sustainable development.

SX1 (East Tower) is occupied by the Victorian Government's Department of Justice and Community Safety, some branches of the Department of Economic Development, Jobs, Transport and Resources and the State Revenue Office.

SX2 (West Tower) is home to Australia Post and the Energy and Water Ombudsman (Victoria) (EWOV).

All content from Kiddle encyclopedia articles (including the article images and facts) can be freely used under Attribution-ShareAlike license, unless stated otherwise. Cite this article:
Southern Cross Tower Facts for Kids. Kiddle Encyclopedia.