Kids Encyclopedia Facts
This page is about the New Zealand stereotype. For other uses, see Southern Man. 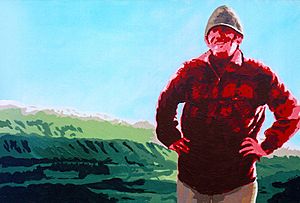 In New Zealand, the southern man is a stereotypical male from the more rural South Island, well used to the solitude and conditions of open mountain or hill country, and completely out of his depth in the city. He is usually depicted as wearing an oilskin duster, Swanndri and slouch hat, an image closely related to Kiwi stockmen. This stereotype is closely connected with a common trope in New Zealand fiction, the man alone.

The stereotype draws on images of high country farmers and hunters, particularly from areas such as Central Otago and the Mackenzie Basin, who work large sheep stations, often employing the horse and dog rather than mechanised transport, due to the terrain they have to cover. This archetypal New Zealand character, though strong in tradition, is one currently facing a threat to its existence in the outside world, thanks to changes in New Zealand's traditional rural ways of life.

All content from Kiddle encyclopedia articles (including the article images and facts) can be freely used under Attribution-ShareAlike license, unless stated otherwise. Cite this article:
Southern man Facts for Kids. Kiddle Encyclopedia.