The Southport Historic District in the town of Fairfield, Connecticut is a 225-acre (91 ha) area historic district that was listed on the National Register of Historic Places in 1971. It preserves a portion of the modern neighborhood and former borough of Southport, Connecticut. Since the British burnt almost all of Southport's structures in 1779, there is only one home built prior to that date, the Meeker House at 824 Harbor Road, which survives.

The area of the district is bounded on the north by the Metro-North railroad tracks, on the south by the Mill River and Southport Harbor, on the west by Old South Road, and on the east by Rose Hill Road. It includes additional properties on both sides of Old South Road and Rose Hill Road, but excludes the commercial and industrial properties along Pequot Avenue inside the so-defined area. This is about a quarter of the former borough area of Southport, which ran from Mill River to Sasco Creek, and from the Southport Harbor to Mill Hill.

A local commission enforces preservation rules in the district (and also in two other historic districts in the town of Fairfield). Alterations to properties in the district have to be approved. A case where a Greek Revival mansion owner placed a large sculpture on the grounds went all the way to the U.S. supreme court in 2007. The Supreme Court ruled in favor of the commission, that the sculpture qualified as a structure and required commission approval. It was the Historic District Commission of Fairfield. More here. The 80 foot, six ton sculpture by German artist Anselm Kiefer, titled "Narrow as the Vessels", was donated to a museum, and the owner put even more striking (although lighter) sculptures on the lawn instead.

In 1970, the NRHP nomination for the district argued it was "significant because it has been the center of trade and commerce in Fairfield and because its history is typical of the development of commercial life in many New England ports in the fifty years following the revolutionary war. The architecture of the district consists primarily of buildings constructed after 1779 when the British virtually destroyed Fairfield. It is a valuable concentration of Greek Revival and Victorian structures which were for the most part the homes of substantial men whose wealth came from their involvement in commerce, banking, and shipping."

It includes more than 150 contributing buildings. The more significant ones include: 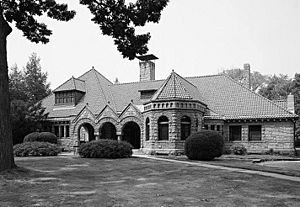 Part of Pequot Road is included in the district. Newer, commercial parts are not.

All content from Kiddle encyclopedia articles (including the article images and facts) can be freely used under Attribution-ShareAlike license, unless stated otherwise. Cite this article:
Southport Historic District (Fairfield, Connecticut) Facts for Kids. Kiddle Encyclopedia.