Southport is a census-designated place (CDP) in the town of Fairfield, Connecticut. It is located along Long Island Sound between Mill River and Sasco Brook, where it borders Westport. As of the 2010 census, it had a population of 1,585. Settled in 1639, Southport center has been designated a local historic district since 1967, and was listed on the National Register of Historic Places in 1971 as the Southport Historic District. 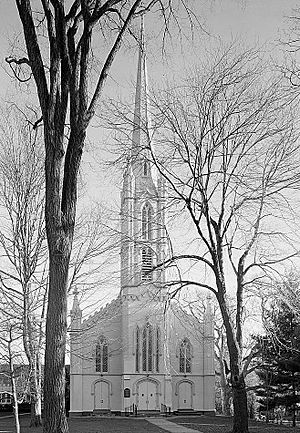 Trinity Church in Southport, photographed in 1966

The earliest recorded event in Southport's history was "The Great Swamp Fight" or "Fairfield Swamp Fight" of July 1637 (not to be confused with the later Great Swamp Fight of King Philip's War), an episode of the Pequot War in which English colonial forces led by John Mason and Roger Ludlow vanquished a band of about 80 to 100 Pequot Indians who had earlier fled from their home territory in the Mystic area and had taken refuge with about 200 Sasqua Indians who inhabited the area that is now Fairfield. The exact location of the battle is not known, but it is known to have been in the vicinity of Southport.

In the eighteenth century, Mill River village, a part of Fairfield, was a small hamlet of a few houses and a wharf at the mouth of Fairfield's Mill River. Farm products from the surrounding area were shipped from Mill River's small harbor to ports in New York and beyond.

By 1831 the village had changed its name to Southport and was a bustling commercial area with warehouses, churches, schools, stores and elegant houses. Before 1853, Southport had its own local government as a borough within the town of Fairfield. Southport became a leading coastal port on Long Island Sound, its ships carrying produce and goods back and forth to New York City. A measure of Southport's success is the fact that throughout the 1800s it possessed the only two banks in town. However, competition from steamboats and the railroad took its toll on prosperity. Resourceful shippers teamed with local farmers and businessmen to keep the port going; the Southport onion, a high quality onion, was developed and grown on Fairfield's hills and shipped in Southport market boats, keeping the harbor profitable until the end of the century. In the 1890s, 100,000 barrels of locally grown onions, carrots, potatoes, and other goods were shipped annually from Southport harbor.

Today, much of the old village area is part of a town historic district, first established in 1967, where buildings from three centuries are protected for future generations. The boundaries of the town historic district are the railroad on the north; the Mill River and Southport Harbor on the south; Church Street; and Old South Road and Rose Hill Road on the west and east, respectively, including all properties on both sides of the roads. Strict historic zoning regulations apply in the district and have been upheld by the Connecticut Supreme Court. The Southport Historic District is also listed on the National Register of Historic Places.

There were 998 households, out of which 22.7% had children under the age of 18 living with them, 50.1% were married couples living together, 8.3% had a female householder with no husband present, and 39.3% were non-families. 33.1% of all households were made up of individuals, and 15.8% had someone living alone who was 65 years of age or older. The average household size was 2.21 and the average family size was 2.81.

The main arterial road in the area, the Post Road (US 1), runs through Southport, connecting it to other towns along the Connecticut coast. Interstate 95 also passes through Southport, with two exits located in the neighborhood. Southport is also served by the New Haven Line of the Metro-North Commuter Railroad at Southport Railroad Station, with frequent trains to New Haven and New York City. Limited bus service is provided by the Greater Bridgeport Transit Authority.

Eagle Hill School-Southport, a private day school for children with learning disabilities, has been located since 1985 in the former Pequot School in Southport. The historic school building was earlier acquired by the Southport Conservancy to save it from demolition. 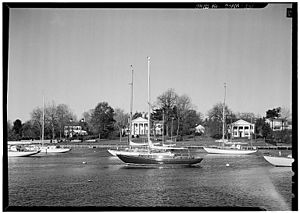 The following are among the notable people who have lived in Southport:

All content from Kiddle encyclopedia articles (including the article images and facts) can be freely used under Attribution-ShareAlike license, unless stated otherwise. Cite this article:
Southport, Connecticut Facts for Kids. Kiddle Encyclopedia.