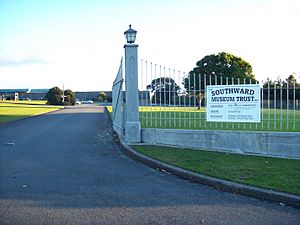 The entrance to Southward Car Museum from Otaihanga Road.

The Southward Car Museum is an automobile museum housing a collection of over 400 vehicles, as well as three aircraft, located on Otaihanga Road, Otaihanga, just north of Paraparaumu on the Kapiti Coast of New Zealand's North Island. The museum is run by a charitable trust, incorporated in 1972.

The core-car collection was the personal work of Sir Len Southward and his wife Vera. A pioneering marine engineering and speed enthusiast, on 22 February 1953 he powered his boat "Redhead" across Wellington harbour to become the first man in Australasia to travel at over 100 mph on water. He established Southward Engineering, which developed from marine engineers into a large steel fabrication business, supplying automotive exhausts, racking, light-walled carbon steel and stainless steel tubing (it is owned today by Melbourne-based Atlas Group). The couple began collecting cars in 1956 with a Ford Model T. Knighted in the 1986 New Year Honours, for services to the community, having established the largest private car collection in Australasia, in 1976 he purchased a 6 hectare site on which to establish a museum open to the public.

Approximately an hour's drive from Wellington and is situated between the North Island Main Trunk railway to the west and State Highway 1 to the east. The museum is a purpose-built building, featuring a 6000 square metre exhibition hall, engineering workshop, gift shop, and small cafe, all set in park-like grounds. The building also includes a 474-seat theatre, and features a 1929 Wurtlitzer theatre organ, which was originally installed in the Civic Theatre in Auckland.

All content from Kiddle encyclopedia articles (including the article images and facts) can be freely used under Attribution-ShareAlike license, unless stated otherwise. Cite this article:
Southward Car Museum Facts for Kids. Kiddle Encyclopedia.